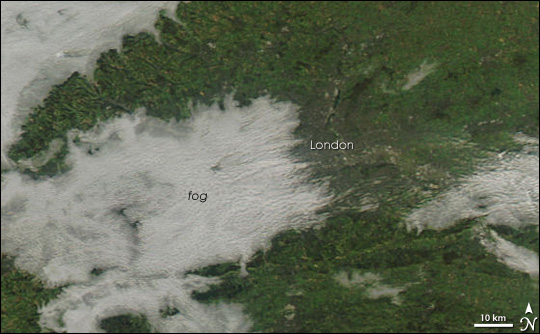 Thick fog surrounded London on the afternoon of December 20, 2006, when the Moderate Resolution Imaging Spectroradiometer (MODIS) on NASA’s Aqua satellite captured this image. White fingers of fog creep from the edge of the fog bank into valleys and over rivers, tracing out the contours of the land. The thickest fog is west of London, the cement-grey sprawl across the center of the image. London’s primary airport, Heathrow, is located under the fog bank. As a result, many flights out of the airport were canceled, leaving as many as 40,000 travelers stranded, reported the BBC. The fog disrupted travel out of Heathrow on both December 20 and December 21, and was expected to cause additional cancellations on December 22.

London was not the only city in the United Kingdom that experienced disruptions because of fog. In the large image, which shows a broader area, patches of thick fog hang over much of the island. For daily images of the United Kingdom, please visit the MODIS Rapid Response web site.