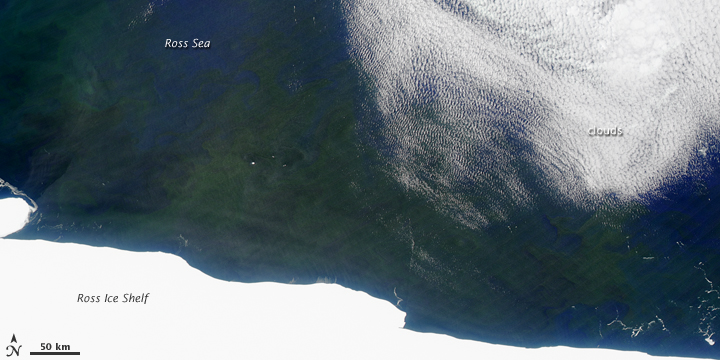 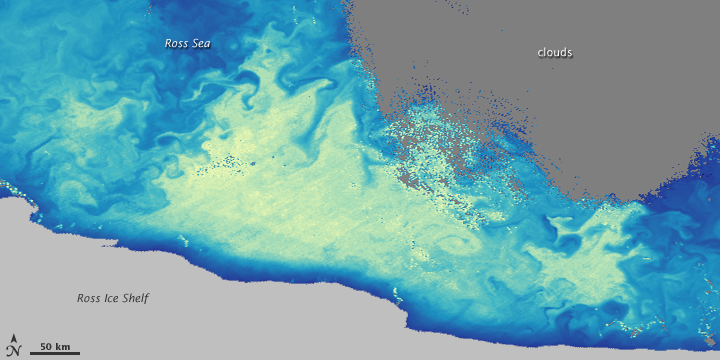 The International Polar Year (IPY), which ran from 2007 through 2008, was a coordinated scientific effort to study Earth’s polar regions. As part of that effort, March 18, 2009, marked the eighth quarterly International Polar Day focusing on polar oceans. Although we may not think of our planet’s oceans when we hear the word “photosynthesis,” as much photosynthesis occurs in the ocean as on land. This productivity is thanks to chlorophyll-rich phytoplankton—microscopic plant-like organsims that live in the surface waters of the ocean. Phytoplankton capture roughly the same amount of carbon as land-based plants do, and they are the foundation of the marine food web, in the same way that plants are the foundation of the food web on land.

The Moderate Resolution Imaging Spectroradiometer (MODIS) on NASA’s Aqua satellite acquired these images of the Ross Sea off the coast of Antarctica on December 5, 2005. The top image is a true-color image, similar to a digital photograph. The ocean appears as a nearly uniform shade of green-blue, contrasting sharply with the ice shelf (lower left) and the clouds (upper right) overhead. The bottom image shows MODIS measurements of ocean chlorophyll, the pigment that phytoplankton use to harvest sunlight. The highest chlorophyll amounts are shown in pale yellow, with smaller amounts in bright blue. The colors indicate chlorophyll concentration measured in a logarithmic scale where the values increase exponentially rather than linearly. Measured in terms of milligrams per cubic meter, chlorophyll concentrations appear greatest close to the Ross Ice Shelf.

In polar waters like the Ross Sea, nutrients accumulate in surface waters during the dark winter months when plants can’t grow. When sunlight returns in the spring and summer, the plants flourish in high concentrations. Because phytoplankton sit at the bottom of the Southern Ocean’s food web, these tiny marine plants have far-reaching impacts. IPY research in the Southern Ocean in 2007 and 2008 included collecting and examining samples of plankton all around Antarctica. The researchers not only collected phytoplankton, but also zooplankton—animal plankton—such as krill. These tiny, shrimp-like animals feed on phytoplankton and are themselves eaten by larger animals, including penguins, seals, and whales. IPY research sought to better understand the complex relationships in the Southern Ocean’s food web.