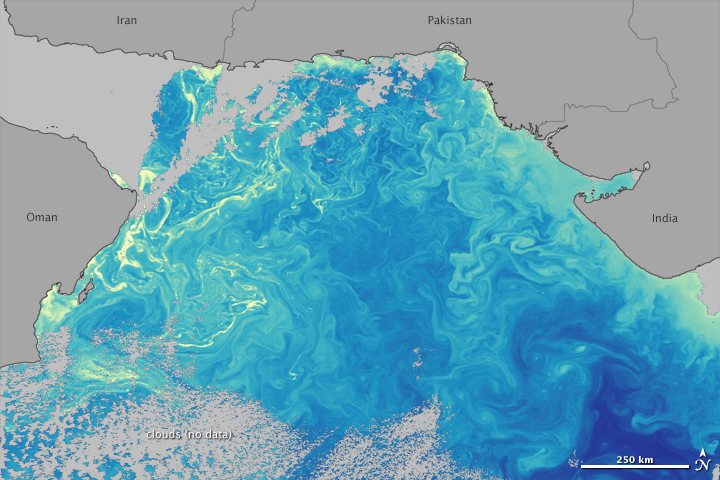 Ribbons and swirls of yellow trace out regions of high chlorophyll concentration in the Arabian Sea in this Moderate Resolution Imaging Spectroradiometer (MODIS) image, taken by NASA’s Aqua satellite on February 22, 2005.

High chlorophyll concentrations indicate that tiny ocean plants, called phytoplankton, are thriving near the ocean’s surface. The plants can both nourish and destroy a marine ecosystem. Phytoplankton are a major source of food for many marine animals. Regions that produce large amounts of phytoplankton also tend to support a thriving fish population. But when phytoplankton concentrations get to be too great, they can create “dead zones” in the ocean’s oxygen-poor regions where few, if any, fish can survive. Dead zones occur when phytoplankton die and begin to sink to the sea floor. Bacteria break down the plants, and if the concentration of decaying plants is high enough, the bacteria can consume all of the oxygen in the region.

Satellite images such as this Aqua MODIS image help monitor phytoplankton concentrations in the world’s oceans. While high concentrations in this image do not necessarily point to dead zones, they can show where potential problems exist. Regions where no data exist because of cloud cover or other reasons are white, while land is grey. 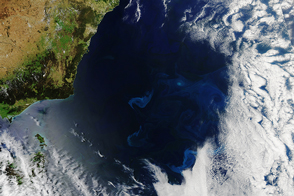 Phytoplankton in the Tasman Sea

Spring bloom in the Arabian Sea