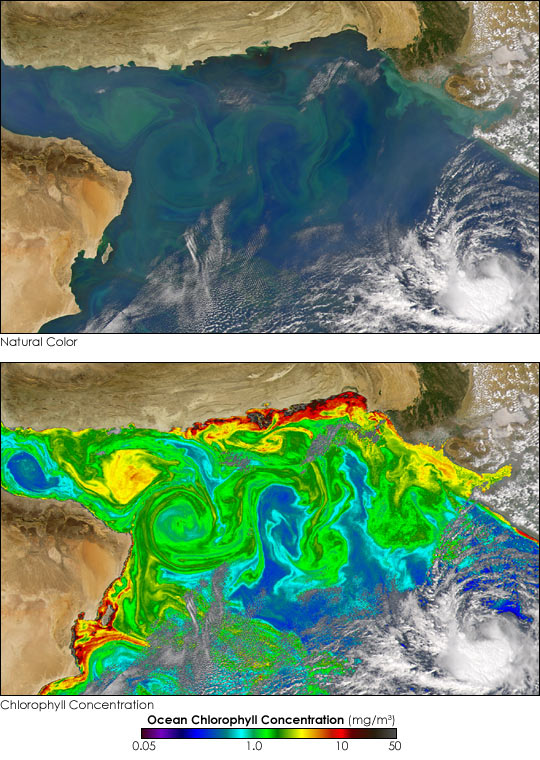 If you followed the marine food chain to its last link, you would find phytoplankton. The microscopic marine plants that form the basis of ocean life depend on many variable factors to sustain their own existence. Like land-based plants, phytoplankton need sunlight and nutrients like iron, nitrate, and phosphate. The amount of phytoplankton that can grow in any section of ocean depends on the availability of these factors.

In the Arabian Sea, phytoplankton thrives in a narrow window of time defined by seasonal monsoons. During the summer monsoon, strong winds blow from the southwest across the Arabian Sea. These winds stir ocean currents, allowing cold, nutrient-rich water to rush up from the bottom. The winds also carry minerals from the land onto the surface of the ocean. The added nutrients from both sources feed the tiny ocean plants.

Though the summer monsoon provides nutrients to the plants, it also limits their growth by blocking sunlight. In June and July, thick, heavy clouds cover the ocean, lowering the amount of light that reaches the surface of the ocean. In August, the clouds typically clear, letting the life-giving light shine through. (To learn more, read "Illuminating Photosynthesis in the Arabian Sea.") In October, the winds begin to reverse, and currents change so that fewer nutrients are available at the surface. It is in this August-to-October window when nutrients are still plentiful and sunlight is strong that phytoplankton grow most readily in the Arabian Sea.

This year is no exception. On October 6, 2004, the Sea-viewing Wide Field-of-view Sensor aboard the OrbView-2 satellite captured the above images showing high concentrations of phytoplankton in the Arabian Sea. The chlorophyll that the plants use to convert light to food tints the water green in the natural color image (top). The phytoplankton are growing in large swirls that follow the eddies and currents of the surface water. In the lower image, ocean chlorophyll concentrations are shown. Not surprisingly, concentrations appear to be highest near the coast where upwelling makes nutrients more available.

Spring bloom in the Arabian Sea