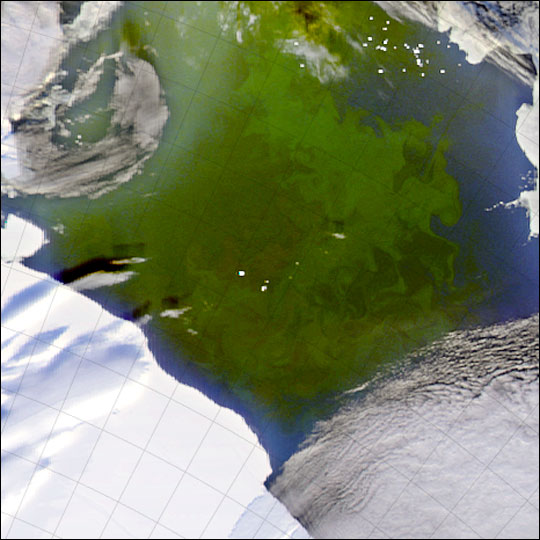 As the Southern Hemisphere moves towards summer, the sea ice is clearing from the Ross Sea and sunlight touches its surface once more. The return of sunlight to the south triggers one of the most intense phytoplankton blooms in the world. Phytoplankton are tiny plants that grow on the surface of the ocean, but in large quantities, they are clearly visible from space. In this image, acquired by the Sea-viewing Wide Field-of-view (SeaWiFS) Sensor flying on the OrbView-2 satellite on December 6, 2004, a forest of phytoplankton forms dense green swirls in the Ross Sea. Drifting icebergs appear as flecks of salt a top the soupy pea-green sea. The Ross Ice Shelf—the most likely source of the icebergs—is the smooth white sheet of ice in the lower left corner of the image.

The summer bloom in the Ross Sea is a crucial part of the Antarctic ecosystem. Here, as elsewhere, phytoplankton are the basis of the food chain, and their presence affects everything from the smallest fish to penguins. Phytoplankton also play a crucial role in the carbon cycle. Millions of the tiny plants suck carbon dioxide out of the atmosphere and release oxygen. When the plants die, they carry the carbon with them to the bottom of the ocean, making the oceans an important carbon sink.

Approximately five to ten types of phytoplankton grow in the icy waters of the Ross Sea. One of those species is Phaeocystis, a brown plant that may be responsible for the brown tint to the dense growth on the sea.

NASA image courtesy the SeaWiFS Project, NASA/Goddard Space Flight Center, and ORBIMAGE.NOTE: All SeaWiFS images and data presented or referred to in this email message are for research and educational use only. All commercial use of SeaWiFS data must be coordinated with ORBIMAGE.