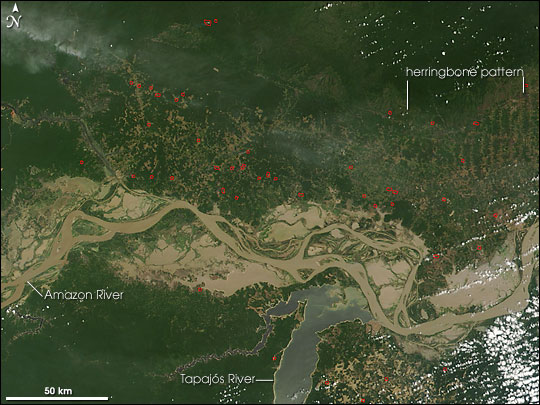 In the state of Para, Brazil, at the confluence of the Tapajos River (bottom center) and Amazon River (running west to east through image center), areas of the Amazon rainforest that are being cleared for logging, ranching, and farming spread outwards to the north and south of the riverbanks. These deforested areas appear lighter green than the surrounding undisturbed forests, and are easily recognizable in satellite imagery because of the way the deforestation often spreads in a herringbone pattern. Once extremely rare in the rainforest even during dry seasons, fire is now a common occurrence in the Amazon as people use it as a land management tool. This image from the Moderate Resolution Imaging Spectroradiometer (MODIS) on NASA's Terra satellite from November 18, 2004, shows locations where MODIS detected active fires marked in red.

Although land management fires are not necessarily immediately hazardous, it is not uncommon for them to escape control and become more dangerous. The burning can also have a strong impact on weather, climate, human health, and natural resources. A recent image, captured on December 7, 2004, shows that fires are still occurring in the area.

These images from the MODIS sensor on the Terra satellite on Nov. 18 and Dec. 7, 2004, show an area of deforestation and fires where the Tapajós River joins the Amazon River in western Pará, Brazil.