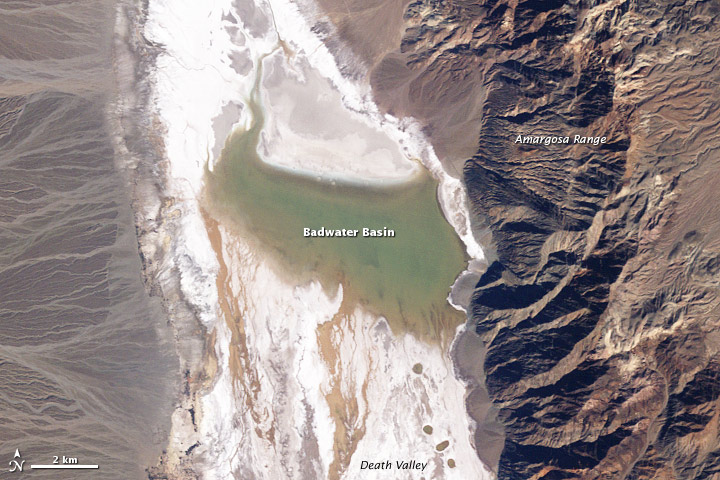 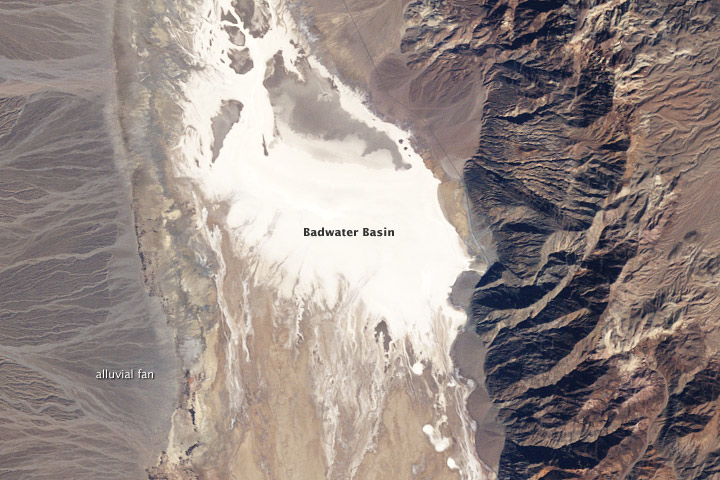 In Death Valley, California, history has been repeating itself. In 2005, this desert valley—the lowest, driest spot in North America—received 4 times its average annual rainfall of 1.5 inches. As it has done at several times for thousands of years, the lowest spot in the valley filled with a wide, shallow lake, but the extreme heat and aridity immediately began sucking the ephemeral lake dry.

This pair of images from NASA’s Landsat 5 satellite documents the short history of Death Valley’s Lake Badwater: formed in February 2005 (top) and long gone by February 2007 (bottom). In 2005, a large pool of greenish water stretched most of the way across the valley floor. By May of 2005 the valley floor had resumed its more familiar role as a salt-coated playa. In time, this freshly dissolved and re-crystalized salt will darken.

The western margin of Death Valley is traced by alluvial fans. During flash floods, rainfall from the steep mountains to the west races with incredible speed and power through narrow canyons, picking up everything from fine clay to large rocks. When these torrents reach the mouths of the canyons in Death Valley, they widen and slow, branching out into braided streams. The paler the fans, the younger they are.

During the Pleistocene ice age, which ended roughly 10,000-12,000 years ago, the Sierra Nevada ranges were much wetter. During that time, Death Valley was filled with a huge lake, called Glacial Lake Manly, that was nearly 100 miles long and 600 feet deep.

NASA images by Robert Simmon, based on Landsat data from the USGS Global Visualization Viewer. Caption by Rebecca Lindsey.