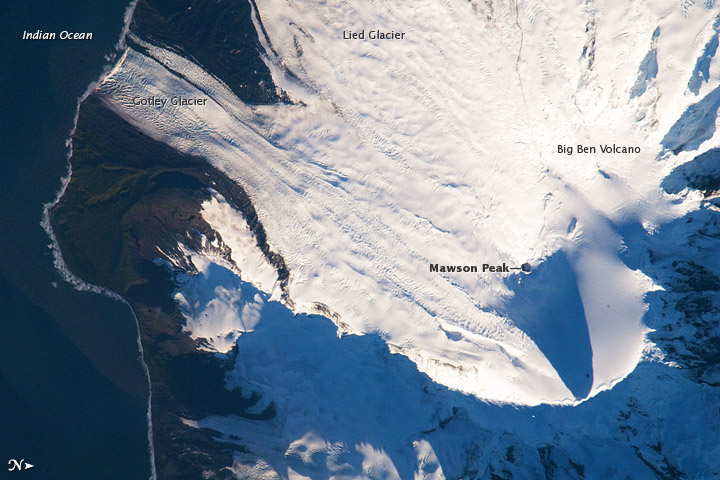 Heard Island is located in the southern Indian Ocean, approximately 1,550 kilometers (963 miles) north of Antarctica. The island is a visible part of the Kerguelen Plateau, a submerged feature on the seafloor. The plateau was formed when large amounts of volcanic rock erupted over a geologically short time period. (When large amounts of volcanic rock erupt beneath the ocean from processes other than seafloor spreading, geologists refer to them as large igneous provinces.) Most of Heard Island is formed from volcanic rocks associated with the Big Ben stratovolcano. The northeastern slopes of the volcano are visible in shadow at the lower right of this detailed astronaut photograph.

Recent volcanic activity at Heard Island has occurred at 2,745-meter (9,006-foot) Mawson Peak, which sits within a breached caldera on the southwestern side of the Big Ben Volcano. Calderas form when a magma chamber beneath a volcano empties and collapses. The shadow cast by Mawson Peak points directly to the crescent-shaped caldera rim. Detailed geologic study of Big Ben Volcano is complicated by the presence of several glaciers, including Gotley and Lied Glaciers on the southwestern slopes. This image, taken during Southern Hemisphere summer, also reveals non-glaciated volcanic rock (light to dark brown) on either side of Gotley Glacier.

Astronaut photograph ISS018-E-38182 was acquired on February 28, 2009, with a Nikon D2Xs digital camera fitted with an 800 mm lens, and is provided by the ISS Crew Earth Observations experiment and the Image Science & Analysis Laboratory, Johnson Space Center. The image was taken by the Expedition 18 crew. The image in this article has been cropped and enhanced to improve contrast. Lens artifacts have been removed. The International Space Station Program supports the laboratory to help astronauts take pictures of Earth that will be of the greatest value to scientists and the public, and to make those images freely available on the Internet. Additional images taken by astronauts and cosmonauts can be viewed at the NASA/JSC Gateway to Astronaut Photography of Earth. Caption William L. Stefanov, NASA-JSC.

This detailed astronaut photograph shows Big Ben Volcano on Heard Island, north of Antarctica, including Mawson Peak and the Gotley and Lied Glaciers.