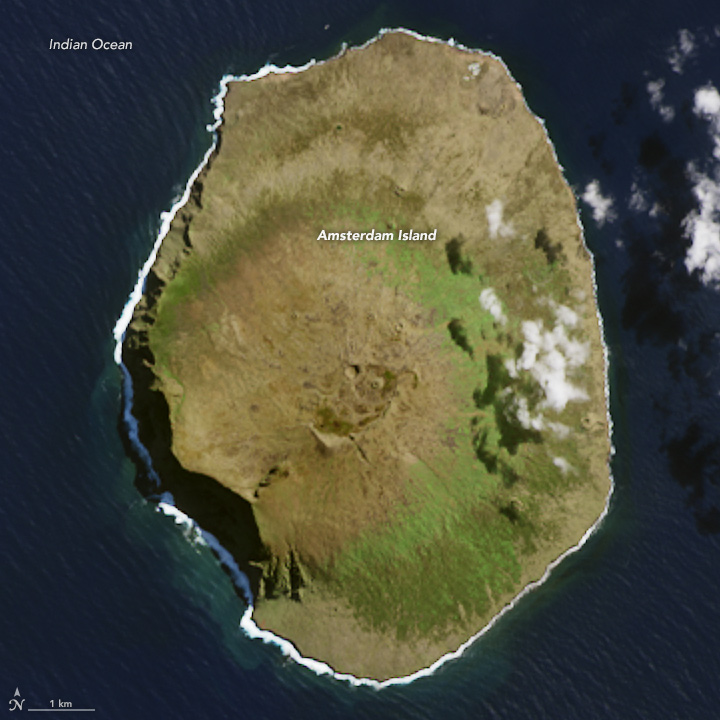 If a volcano erupts in the middle of the ocean, and there is no one within 2,000 miles to see or hear it, can you actually call that volcano active? It is hard to know for sure if Amsterdam Island is active or dormant—it has scarcely been studied—but one thing we can say is that it is remote.

“What is the most remote active volcano on the planet, farthest from people or even farther from any other land mass that people might live?” volcanologist Erik Klemetti asked in a recent blog post. “That prize almost certainly goes to Amsterdam Island in the southern Indian Ocean. Amsterdam Island is staggeringly far from anything:”

The Operational Land Imager (OLI) on Landsat 8 acquired this closeup view of Amsterdam Island on March 26, 2015. This volcanic summit sits near the East Indian Ocean Ridge, and it is the northernmost volcano above the water line on the Antarctic plate. The highest point of the island stands 867 meters (2,844 feet) above sea level. There are two calderas within an area of just 70 square kilometers.

Some scientists suggest that the volcano was last active about 200,000 to 400,000 years ago. But according to Klemetti, there are hints that an eruption may have occurred more recently. “No one has ever seen an eruption at Amsterdam Island, but the volcano has areas that look geologically young,” he wrote. “This means that the lava has not been highly re-vegetated or weathered, so it could have erupted as recently as 100 years ago.”