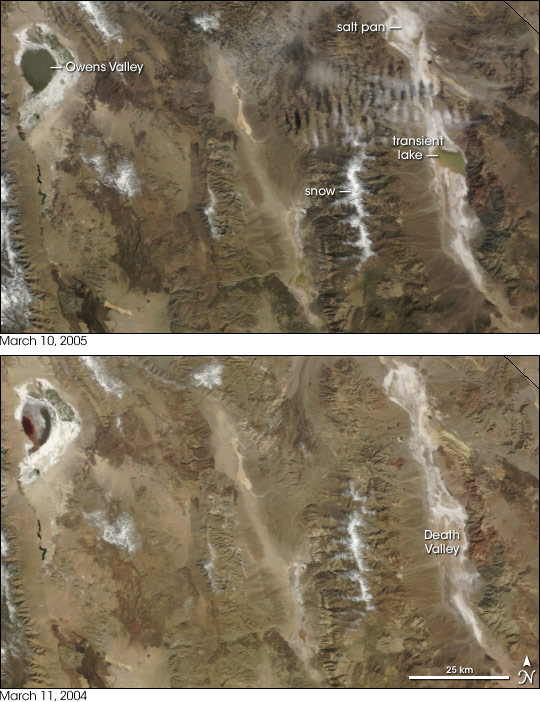 Now the driest place in North America, Death Valley was once a verdant, water-filled haven. Between 128,000 and 186,000 years ago, ice covered the Sierra Nevada and rivers flowed into the long valley, feeding Lake Manly. At nearly 100 miles long and 600 feet deep, this massive lake filled Death Valley. To the west, on the other side of the Panamint Range (capped prominently with snow in the top image), was the slightly smaller Panamint Lake. Though the lake and rivers dried as the ice retreated and the climate warmed, water has left its mark on the landscape. Evaporating water left a white salt pan in its place, so the beds of both lakes are clearly visible in these images, acquired by the Moderate Resolution Imaging Spectroradiometer (MODIS) on NASA’s Terra satellite on March 10, 2005, (top) and March 11, 2004 (bottom).

Driven by a mild El Niño, winter 2005 was wet. Southern California was inundated with heavy rain from December through late February. The effects on the landscape hearken back to an earlier age when water was more prevalent. On March 10, 2005, water had pooled in the former Lake Manly and, less noticeably, in Lake Panamint. To the northwest, Owens Valley—another remnant of the last ice age—is also filling with water.

Aside from darkening the dry salt pans with water, the winter weather had another effect on the landscape. The mountains are darker and slightly greener with growing vegetation. On average, Death Valley receives less than two inches of rain per year. When the rain does fall, the desert springs to life, blossoming with flowers. This year, Death Valley National Park received over six inches of rain, and the result is a rainbow of wildflowers—one of the best blooms in modern history, the National Park Service reports. For daily wildflower updates, visit the Death Valley National Park home page.