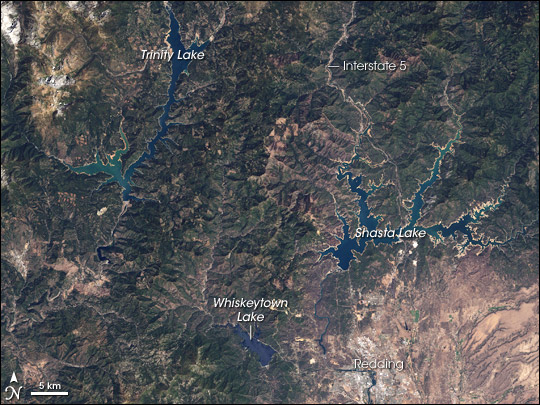 According to local lore, northern California’s Whiskeytown derived its name from a mishap on a mountain trail. Donkeys lost their footing and dropped a load of whiskey down a steep valley. Whatever the origin of the area’s name, it has emerged as a popular destination for outdoor recreation.

NASA’s Landsat 7 satellite captured this image of Whiskeytown National Recreation Area on August 17, 2000. This image shows the meandering water bodies of Trinity Lake in the northwest and Shasta Lake in the east, both of which result from dammed rivers. To the south is Whiskeytown Lake, another human-made reservoir covering 3,200 acres. A few tributaries feed Whiskeytown Lake, but most of its water is piped in from Trinity Lake. All three bodies of water are rimmed by bare ground, shown as pale beige outlines. In some spots, especially the northern tip of Trinity Lake, the prominent shorelines likely indicate low water levels. Dark green vegetation covers the valleys and most of the mountains, a few isolated peaks poking their heads above the tree-line. Much of the landscape around the town of Redding is sparsely vegetated, except for pockets of bright green, which are probably irrigated croplands.

Whiskeytown National Recreation Area sits where the Klamath Mountains meet the northern edge of Sacramento Valley. This image shows the area’s rugged landscape in sharp relief. Although summertime temperatures can soar to over 38 degrees Celsius (100 degrees Fahrenheit), snow covers the mountain peaks during the winter. The lush vegetation enjoys average annual rainfall of over 140 centimeters (55 inches) a year.