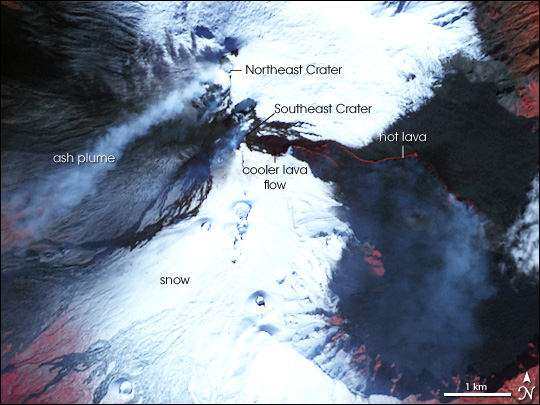 Plumes of steam rose from several vents on Mount Etna on November 30, 2006, a testament to the volcano’s ongoing activity. The strongest plume appears to be coming from the Northeast Crater, but a second fainter plume is also emanating from the Southeast Crater. Etna has been rattled by frequent eruptive episodes through much of 2006, and in late November, most of the activity was centered around the Southeast Crater, said the Italian Istituto Nazionale de Geofisica e Vulcanologia, the organization of volcanologists officially charged with monitoring the volcano. The eruption was marked by continuous lava flows from several vents in and near the crater, explosions, rockfalls, steam, and rock debris.

Much of Etna’s recent activity is evident in this image, taken by the Advanced Spaceborne Thermal Emission and Reflection Radiometer (ASTER) on NASA’s Terra satellite on November 30. Snow caps the summit of the volcano, covering all but the freshest lava flows. One such flow sent rivers of lava down the southwest flank of the volcano between October 26 and November 19, 2006. Another pool of new lava sits on the eastern side of the Southeast Crater. By November 30, both pools had cooled into solid rock, which appears black in this image, made from a combination of visible and infrared light.

Farther down the eastern side of the volcano, fresh lava pours from a third fissure and snakes down the mountain off the right edge of the image. Steam and possibly volcanic gases rise from the line of hot lava, obscuring the Valle del Bove, a depression in the side of the mountain formed by a collapse during an ancient eruption similar to Mount St. Helens’ 1980 eruption. The intense heat coming from the new lava saturates ASTER’s near-infrared sensors so that the river of lava glows red. Since plants reflect near-infrared light and ASTER can’t tell the different between emitted and reflected light of the same wavelengths, plant-covered land surrounding the volcano is also red. Older lava flows and patches of otherwise bare earth are grey.

Sitting on the eastern shore of Sicily, Mount Etna is Italy’s highest and most voluminous volcano, says the Smithsonian’s Global Volcanism Program.Humans have recorded eruptions at Etna since 1500 BC, making Etna one of the world’s best-documented volcanoes. Along with other volcanoes in southern Europe and southwestern Asia, Etna has one of the world’s longest records of volcanic activity. Volcanic activity in the region is driven by the collision of the north-moving African Plate—the slab of the Earth’s crust on which Africa rests— and the Eurasian Plate. This activity has produced such famous volcanoes as Santorini, in Greece, and Vesuvius in mainland Italy.

A 15-meter-resolution KMZ file of Mt. Etna is available for use with Google Earth.

NASA image by Jesse Allen, based on data provided by the NASA/GSFC/METI/ERSDAC/JAROS, and U.S./Japan ASTER Science Team