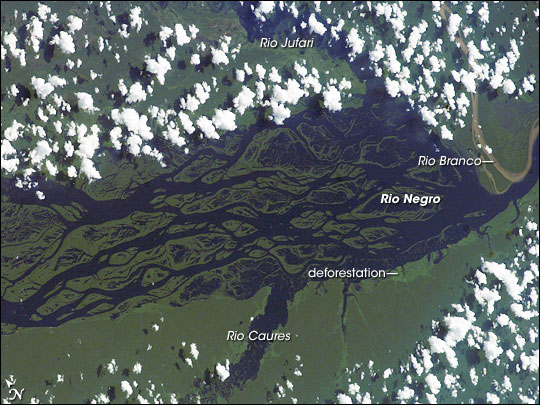 The wide, multi-island zone in the Rio Negro (Black River) shown in this astronaut photograph from September 2, 2006, is one of two, long “archipelagoes” upstream of the city of Manaus (not shown) in central Amazonia. Sixty kilometers of the total 120-kilemeter length of this archipelago appear in this image. The direction of the river’s flow is east-southeast, which is from left to right in this image; the river is about 20 kilometers wide near the right side of the image. On the day the image was taken, air temperatures over the cooler river water of the archipelago were just low enough to prevent cloud formation. Over the neighboring rainforest, temperatures were warm enough to produce small convection-related clouds, known to pilots as “popcorn” cumulus. Several zones of disturbed forest, represented by lighter green zones along the river banks are also visible.

Two different types of rivers appear in this image: black-water rivers and white-water rivers. In addition to the Rio Negro, two other “black” rivers—Rio Caures and Rio Jufari—join the Rio Negro in the scene. At the right of the image is the Rio Branco (White River), which is the largest tributary of the Rio Negro. The difference in water color is controlled by the source regions. Black-water rivers derive entirely from soils of lowland forests, rich in leaves and other decaying organic matter. Water in these rivers has the color of weak tea, which appears black in images from space. By contrast, white-water rivers like the Branco arise in mountainous country where headwater streams erode exposed rock. White-water rivers carry a load of sand and mud particles, which lighten the waters. The Amazon itself rises in the Andes Mountains, where very high rates of erosion occur, and it is thus the most famous white river in Amazonia.

This astronaut photograph was taken in September, when the rivers are near their seasonal low-water stage. Pictures taken at other times show the channels to be much wider during high-water season (May-July), when water levels rise several meters. High-resolution GPS (Global Positioning System) measurements at Manaus recently documented that the land surface actually rises vertically a small amount when the vast mass of water drains away each season. Although the rebound amount seems small, the vertical displacement—50-70 millimeters—was unexpectedly large according to the scientists who performed the study.

Astronaut photograph ISS013-E-74843 was acquired September 2, 2006, with a Kodak 760C digital camera using an 180 mm lens, and is provided by the ISS Crew Earth Observations experiment and the Image Science & Analysis Group, Johnson Space Center. The image in this article has been cropped and enhanced to improve contrast. The International Space Station Program supports the laboratory to help astronauts take pictures of Earth that will be of the greatest value to scientists and the public, and to make those images freely available on the Internet. Additional images taken by astronauts and cosmonauts can be viewed at the NASA/JSC Gateway to Astronaut Photography of Earth.