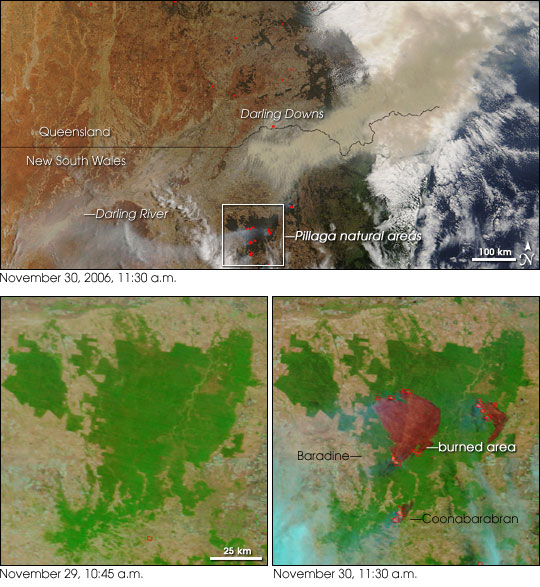 In northeastern New South Wales, a large fire flared up on November 29, 2006, and within a day it had scorched a large area in and around the Pilliga Nature Reserve and State Forests north of the town of Coonabarabran. This trio of images shows the area in photo-like natural color on the morning of November 30 (top), and in infrared-enhanced “false-color” (bottom) on November 29 and November 30. All the images were made from data collected by the Moderate Resolution Imaging Spectroradiometer (MODIS) on NASA’s Terra satellite. Places where the sensor detected actively burning fire are marked in red.

In the photo-like image, a huge brownish-gray plume spreads northeast across the border between New South Wales and Queensland near Darling Downs. This plume is most likely dust, perhaps mingled with smoke. A dust storm was brewing over the headwaters of the Darling River on November 29. The same windy weather that lofted the dust could have driven the rapid spread of the fire. In the false-color images, unburned vegetation appears bright green, naturally bare or sparsely vegetated ground is pale beige, and burned areas are brick red. Within the red outlines marking the active fires, a bright pink glow often indicates open flame. The largest burned area is at least 25 kilometers wide (about 15.5 miles).

According to a news report from the Australian Broadcasting Corporation Website, a water-bombing helicopter was brought in to help the Rural Fire Service control the bushfire, which was said to be burning out of control within kilometers of the town of Coonabarabran. Crews are using bulldozers to create firebreaks. As of November 30, the firefighters had established containment lines northwest of the fire. In that town and other small towns in the region, residents were being advised to prepare their properties for the threat of fire.

The high-resolution image above is a version of the photo-like image from November 30 at MODIS’ maximum spatial resolution (level of detail) of 250 meters per pixel. The MODIS Rapid Response System provides twice-daily images of the region in both photo-like and false-color versions at a variety of resolutions.

Spurred by dry conditions and high winds, wildfires raged through several natural areas in New South Wales in November and December 2006, including the Blue Mountains and the Pilliga natural areas.