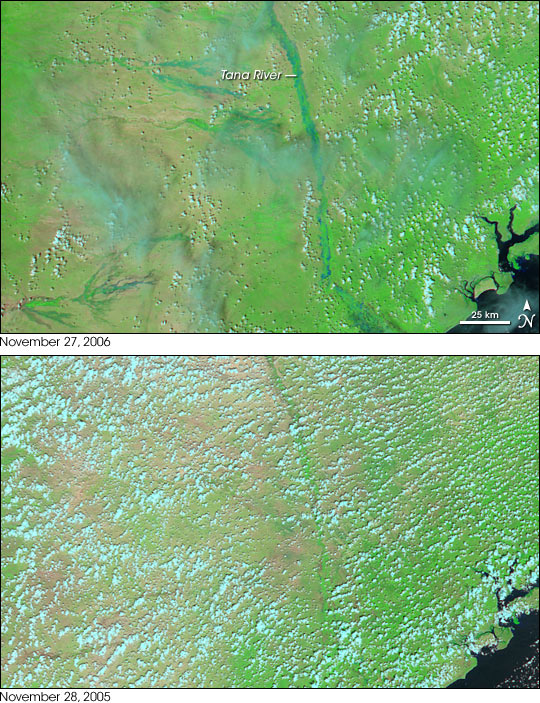 An estimated 723,000 people were affected by devastating floods in Kenya in November 2006, according to reports from the ReliefWeb organization. The heavy rains caused rivers to overflow their banks and inundate villages and farmland, produced landslides, and increased the risk of cholera and other diseases that spread when water and sanitation systems are overwhelmed by floods. The United Nations World Food Program estimates that emergency workers had been unable to reach as many 150,000 affected people as of November 28 due to impassable roads.

Among the most severely hit areas was the Tana River District in southwest Kenya’s Coast Province. This pair of images shows the river during the flooding on November 27, 2006 (top), compared to November 28, 2005, when the river was in a more normal state for this time of year. These “false-color” images are made from visible and infrared light observed by the Moderate Resolution Imaging Spectroradiometer (MODIS) on NASA’s Terra satellite. In this kind of image, bare or thinly vegetated ground appears light tan or pinkish, vegetation appears bright green, and water appears blue. Clouds are light blue or white.

The Tana River runs though the center side of the scene. In the non-flood image, the river is visible as an indistinct, green ribbon of vegetation. To the west of the river, only the faintest hints of ephemeral stream beds can be seen though the clouds in the non-flood image. On November 27, the Tana River had spilled out of its banks; the combination of flood water and vegetation gives the river a turquoise color. In the low-lying area to the west of the Tana River, numerous streams and rivers have fanned across the landscape. At the bottom center of the scene, a dark pool of flood waters spans an area up to 12 kilometers (about 7.5 miles) wide in places. The whole landscape has responded to the rains; bright green vegetation has sprung up across much of the area.