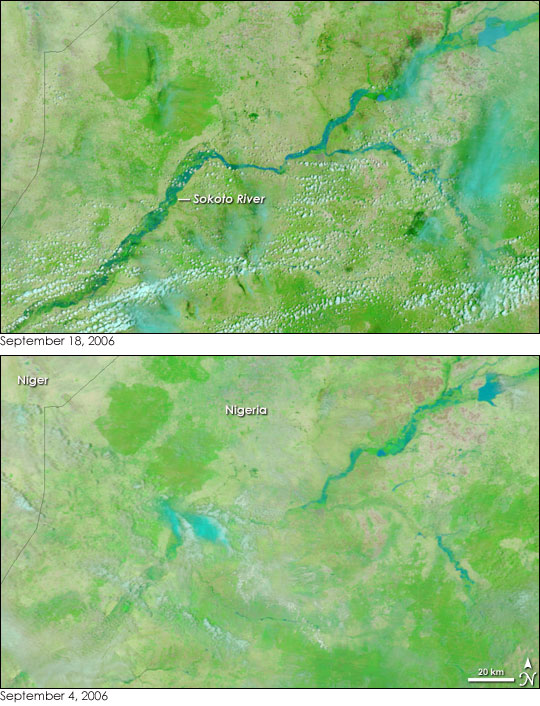 Unusually heavy rains fell during West Africa’s rainy season in 2006, bringing devastating floods to many countries. Nearly 26,000 were left homeless in Niger and Burkina Faso, the most severely affected countries, reported the United Nations News Service. The floods extended south of Niger into Nigeria. On September 18, 2006, the Moderate Resolution Imaging Spectroradiometer (MODIS) on NASA’s Terra satellite captured the top image of flooding along the Sokoto River and its tributaries. The river, only faintly visible in early September (lower image), formed a wide blue ribbon across northern Nigeria on September 18.

Though the unusually heavy rains may have made the Sokoto River flood larger than average, the flood seen here is likely the river’s annual, seasonal flood. Like the Nile River in Egypt (before it was controlled by dams), the Sokoto floods annually during the rainy season, spreading fresh sediment over its flood plain. The river is an important source of water in the generally arid region, and it provides the means for growing irrigated crops. Indeed, strips of bright green vegetation line the river in these images. The rains have also brought a brush of green to the tan, sparsely vegetated areas away from the river. In these false-color images, clouds are pale blue and white.

The large images provide a wider view of the region, including much of Niger to the north. Daily images of Nigeria are available from the MODIS Rapid Response Team.