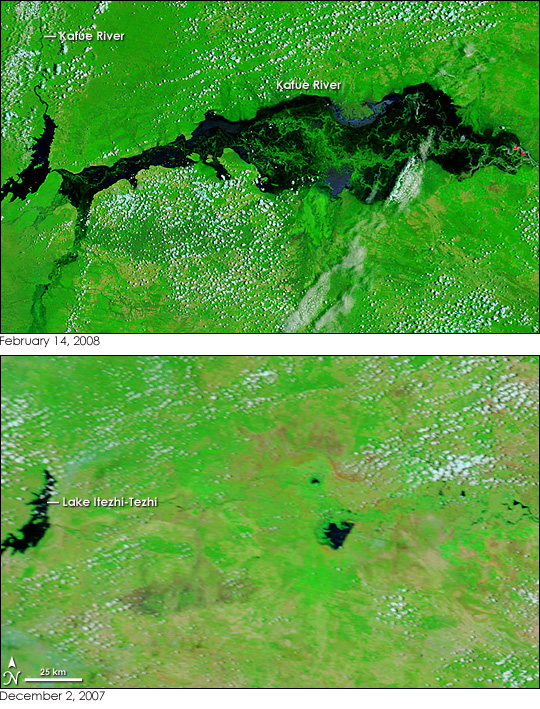 The swampy wetlands that surround Zambia’s Kafue River were submerged with water when the Moderate Resolution Imaging Spectroradiometer (MODIS) on NASA’s Terra satellite captured the top image on February 14, 2008. The river floods seasonally, but the rainy season of 2007-2008 caused exceptional flooding across southern Africa. Under the influence of unusually intense rains, the Kafue River spanned tens of kilometers. The river’s water is black in this image, a false color image made with infrared and visible light. The Kafue River flows through a wide, flat flood plain after leaving Lake Itezhi-Texhi through the Itezhi-Texhi dam. With little topography to confine it, the flood is wide and shallow. Bright green plants rise above the water, and popcorn clouds, light blue and white, dot the scene.

The lower image, captured on December 2, 2007, before the rainy season set in, shows the river in dry season conditions. The contrast between the December 2 image and the February 14 image reveals that both Lake Itezhi-Tezhi and the Kafue River upstream of the lake were running high. Several smaller tributaries flowing into the Kafue from the south and west were also swollen. The rain also spurred plant growth. On December 2, patches of tan, bare or sparsely vegetation land punctuated the green, plant-covered landscape. By February 14, most of the region was entirely covered in plants.

Zambia’s Chambeshi River had been transformed from a barely visible line to a broad lake more than 20 kilometers wide on February 6, 2007. Many rivers in southern Africa, including the Zambezi, pushed over their banks in early 2007 under the onslaught of an exceptionally early and heavy rainy season.