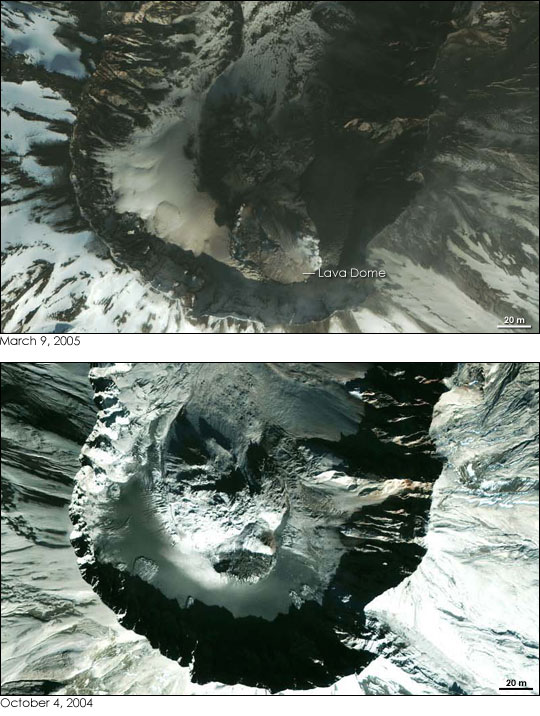 On March 8, 2005, Mount St. Helens belched a large cloud of ash and steam, the largest to erupt from the volcano since October 2004. The volcano rumbled back to life in September 2004, and has been restless ever since. The IKONOS satellite snapped the top image of Mount St. Helens on March 9, the day after the most recent eruption. In the five months between October 4, when Ikonos acquired the bottom image, and March 9, a new lava dome has grown in the crater, the large bowl in the center of these images. The new dome forms a large brown bulge that wasn't previously present. The fact that new dome was still intact on March 9 is evidence that it was not the source of the recent eruption. So far scientists have not determined the source of the explosion.

The USGS Cascades Volcano Observatory reports that as of February 1, 2005, the new dome had risen 500 feet higher than the top of the old lava dome, making the new dome’s top about 700 feet below the rim of the crater. The U.S. Geological Survey estimates that the new lava dome, combined with deformed glacier ice and the part of the crater floor that the dome is lifting up have a volume of about 50 million cubic yards, which is almost one-half of the volume of the old dome prior to the major eruption in 1986.

Another feature that points to Mount St. Helens’ recent activity is the snow inside the crater, which is tinted brown with ash. Other differences between March 9 and October 4 may be a result of the time of day—shadows fall in different places in the images because of the sun’s location when each image was acquired.