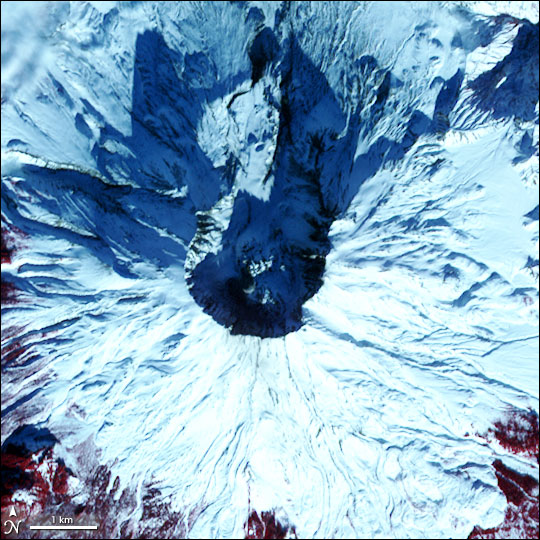 Believe it or not, Mount St. Helens was an erupting volcano when the Advanced Spaceborne Thermal Emission and Reflection Radiometer (ASTER) acquired this image on December 12, 2005. It may not be spouting ash and steam, but Mount St. Helens is steadily pushing a column of rock into its crater. Throughout 2005, the dome in the volcano’s crater grew by an average of two cubic meters per second as magma pushed its way steadily up. In this image, snow and shadow mask the growing dome, which is on the southeast side of the crater.

There are several types of volcanic eruptions ranging from violent explosions to oozing lava, and Mount St. Helens has demonstrated many of them. In 1980, the volcano erupted violently, sending up a cloud of ash and volcanic gas and blasting pyroclastic flows—fast-moving clouds of rock fragments, ash, and gases—down the mountain. The most recent eruption started with a swarm of earthquakes on September 23, 2004. By October 1, the volcano has breathed out a plume of ash and steam, and then settled into its dome-building eruption on October 11, 2004. Fourteen months later, the dome-building eruption continued, punctuated by small earthquakes that shake the mountain every minute and a half as magma rises in the dome. Mount St. Helens is the youngest and most frequently active of all of the volcanoes in the Cascade Range of the northwestern United States. The Cascades Volcano Observatory provides daily updates and photos of the eruption.

A year after the volcano started rumbling, Mount St. Helens continues a quiet eruption, steadily building a bulging dome in its crater.