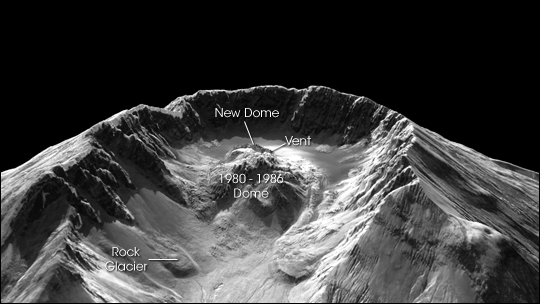 Sometimes science is serendipitous, and this image is one such example. Scientists from the United States Geological Survey (USGS) and NASA have teamed up to survey topographic change at Mount St. Helens using Light Detection and Ranging (LIDAR) technology. LIDAR maps topography by bouncing a laser pulse from an airplane to the ground tens of thousands of times each second. The technique results in topographical maps that are vertically accurate to within 10 centimeters (4 inches). The USGS conducted a LIDAR survey of Mount St. Helens in September 2003, under contract with EarthData International. NASA and the USGS were planning to expand upon that survey in November 2004, mapping a fault zone that the volcano straddles. The mapping was to be done by TerraPoint USA, Inc. who has been working with NASA and the USGS to map fault zones in the Pacific Northwest.

St. Helens had plans of its own. In late September 2004, the volcano rumbled back to life with renewed earthquake activity. A new volcanic dome began to rise out of the crater formed by the 1980 eruption, and on October 1, a cloud of ash and steam erupted. USGS scientist Ralph Haugerud and David Harding from NASA Goddard Space Flight Center worked with TerraPoint to rapidly mobilize, accelerating the return to St. Helens. They hoped to measure deformation in the volcano’s crater by comparing LIDAR surveys measured over a year’s period. On October 4, TerraPoint took to the skies and resurveyed the mountain. Other remote sensing instruments were also targeting St. Helens that day, including Space Imaging’s IKONOS sensor orbiting 681 kilometers above the Earth.

A stunning combination of the October 4th LIDAR and IKONOS data is shown in the above image, a one-meter-per-pixel IKONOS image draped over the two-meter-per-pixel LIDAR elevation map. In this image, the new lava dome rises behind the lava dome that formed between 1980 and 1986. The new dome grew 110 meters (360 feet) between late September and October 4, 2004. To its right, a dark slit shows where a new vent opened as the volcano erupted.

The dome wasn’t the only change the LIDAR data recorded. Unrelated to the eruption, rock glaciers—a mixture of rock and ice—moved down the slope as new material fed them. One such glacier can be seen on the left edge of the image. A comparison of this year’s topographic map to last year’s shows shrinking snow fields, growth in the crater glacier, and several rock slides. (See “Laser Technology Helps Track Changes in Mount St. Helens” for more information and comparison images.)

The animations provided above of the IKONOS image draped on the LIDAR data offer a 360-degree view of the crater. This fly-in approaches the crater from the north, circles the crater rim, then zooms into the crater to focus on the new lava dome before zooming back out to a bird’s eye view of the entire crater.