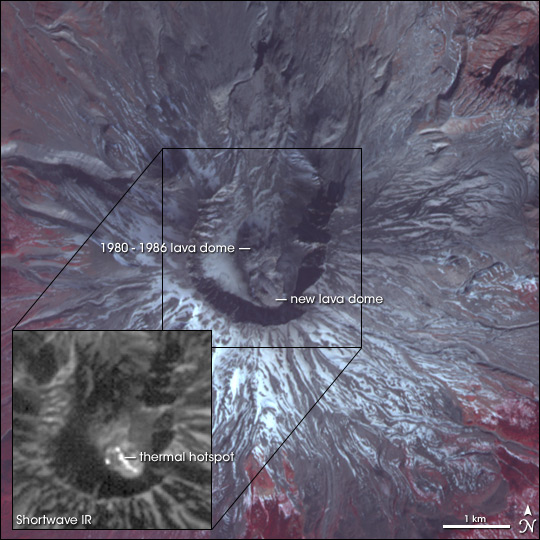 Several days after the most recent eruption of Mount St. Helens, the Advanced Spaceborne Thermal Emission and Reflection Radiometer (ASTER) on NASA’s Terra satellite captured this cloud-free shot of the volcano. This image from March 15, 2005, is a combination of ASTER’s observations in near-infrared, red, and green wavelengths (ASTER bands 3, 2, & 1). Snow appears white, bare ground is grey to brown, while vegetation, such as conifererous forests on the mountain slopes, appears red.

The image reveals that the March 8 eruption did not disturb the new lava dome, as it is still intact near the southern rim of the crater. The lava dome continues to grow, made of old rock being pushed up by magma from underneath and of new rock formed from molten lava. The new rock is building the lava dome along what scientists are calling the “whaleback.” ASTER observed the spine of the whaleback in the shortwave-infrared bands (inset), which show bright hotspots in a line down the center of the dome. As this image reveals, hot rock continues to push to the surface, adding to the bulk of the lava dome. The dome has expanded so that it now impinges on the south crater rim.

The crater rim is the large circular feature in the center of the image, and the southern rim casts a very dark shadow onto the floor of the crater. The sharp ridge that marks the crater’s boundary is broken by a large gap in the northeast. During the eruption of Mount St. Helens in May 1980, this part of the crater rim and a large section of the northern flank exploded and collapsed in a massive landslide, which was followed by a devastating flow of volcanic material, trees, melted snow, and mud.