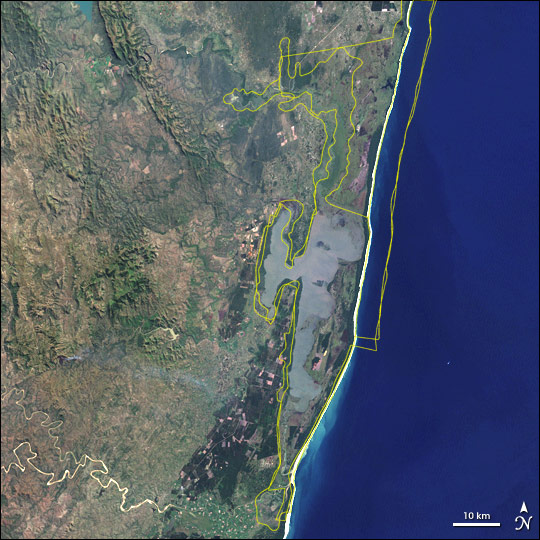 The Greater St. Lucia Wetland Park is a United Nations World Heritage Site located on the Indian Ocean coast of South Africa near the borders with Mozambique and Swaziland. The park encompasses several different conservation areas (marked with yellow lines) centered on Lake St. Lucia, its tidal estuary, neighboring game reserves, and the St. Lucia Marine Reserve, which extends offshore into the Mozambique Strait (image right). The oldest of the reserves within this park, St. Lucia Game Reserve, was established in 1895.

Like many tidal estuaries, Greater St. Lucia has diverse wildlife reflecting the concentration of diverse ecosystems created by variations in the degree of salinity from season to season, year to year, and location to location within the park. The estuary is the largest in Africa and boasts, among other attractions, the world’s largest forested sand dunes, which reach up to 600 feet. Swamps along the border of the lake, and “sponge” areas are fed by water seeping through the dunes; these provide critical refuges to freshwater life when the lake salinity is particularly high.

Though less well known than larger southern African parks like Kruger National Park and the Okavango Delta, St. Lucia supports more species, and for some, St. Lucia is critical habitat. These include the white-backed and pink-backed pelican, greater and lesser flamingos, fish eagles, and some 530 other bird species. It is also home to the largest population of hippopotamus in South African parks. Elephants were reintroduced in 2001. Two sea turtle species use the beaches for laying eggs. The coastal reserve includes not only beaches but offshore coral reefs, and humpback whales migrate along this section of the coast. It is the one park in Africa where you can find hippopotamus, crocodiles, and sharks all in the same area.

But of all the interesting species in the area, perhaps none is so exotic, exciting, and peculiar as the coelacanth. It is a fish species from millions of years ago that was known to scientists from fossil records and presumed to have been extinct until a live specimen was found in a trawler net in 1938 just off the African coast. Scientists have since found a number of these bizarre four-legged fish in very deep, rocky, marine environments, but it is still a very rare fish and protected under international law. On November 27, 2000, three living specimens of coelacanth were found and photographed in a submarine canyon off the coast near Sodwana Bay inside the UN World Heritage Site, adding this living fossil to the collection of species known to live in the St. Lucia Reserve.

The image above was created from data collected by the Landsat 7 satellite’s Enhanced Thematic Mapper Plus (ETM+) instrument. This true-color image was created by combining the red, green, and blue wavelengths (ETM+ bands 3, 2, and 1). GIS layers were added to show UN conservation area.

Sidi Toui National Park is in the southern half of Tunisia, in a relatively mountainous area close to the Libyan border.