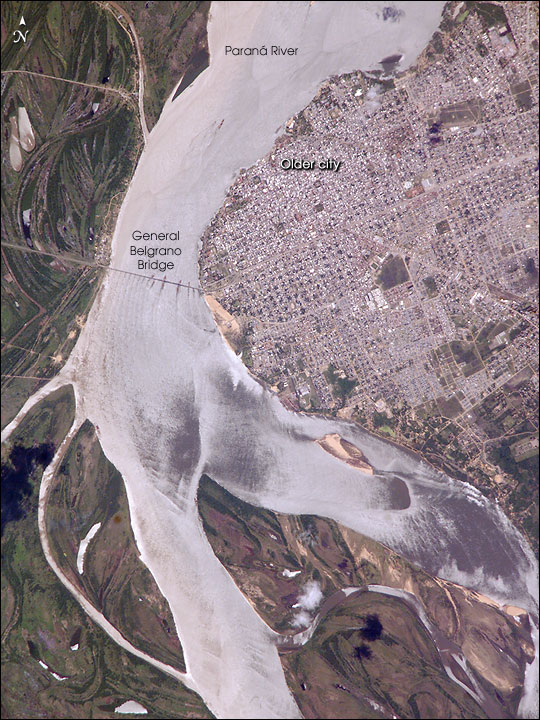 Corrientes, Argentina (population 347,000), sits on the east bank of the Paraná River, South America’s third largest river (after the Negro and Amazon Rivers). From its headwaters in southeastern Brazil, the river flows southwestward around southern Paraguay, and then into Argentina. Corrientes is located just inside Argentina, across the river from the southwestern tip of Paraguay.

The bridge over the Paraná, built in the 1970s, connects Corrientes to its sister city, Resistencia, (beyond the left edge of image) on the western bank of the river. Sun glint on the river gives it a silvery glow and emphasizes channel islands in the river, side channels, and meander scars on the floodplain opposite the city, and even reveals the pattern of disturbed flow downstream of the bridge pylons.

Although it lies 500 miles from the sea, Corrientes is a major port city. Barge traffic from Corrientes supplies landlocked Paraguay and Bolivia and interior parts of Brazil. Local manufactures and farm products are sent downstream to Buenos Aires, where the Paraná empties into the Atlantic Ocean through the Rio de la Plata Estuary. Founded in 1588, the city's name is an abbreviated version of the historic one, “San Juan de Vera de las Siete Corrientes” (San Juan de Vera of the Seven Currents), which honored the city’s founder and the complex behavior of the river in that location. The sun glint on the river highlights the different currents.

The old part of the city appears as a zone of smaller, more densely clustered city blocks along the river to the north of a major highway, which runs through Corrientes from the General Belgrano Bridge to the northeast (upper right of image). Larger blocks of the younger cityscape, with more green space, surround these core neighborhoods.

Astronaut photograph ISS010-E-5070 was acquired October 25, 2004, with a Kodak K-760C digital camera with an 800-millimeter lens, and is provided by the ISS Crew Earth Observations experiment and the Image Science & Analysis Group, Johnson Space Center. The International Space Station Program supports the laboratory to help astronauts take pictures of Earth that will be of the greatest value to scientists and the public, and to make those images freely available on the Internet. Additional images taken by astronauts and cosmonauts can be viewed at the NASA/JSC Gateway to Astronaut Photography of Earth.