River Plumes in the Gulf of Mexico 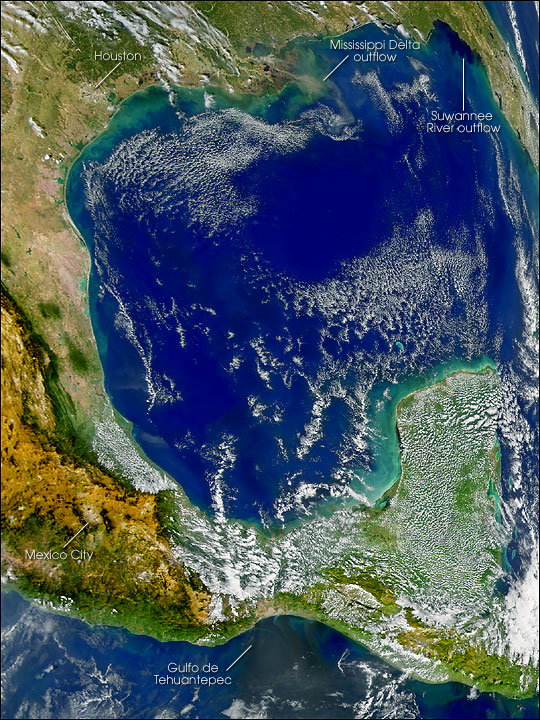 On November 7, 2004, skies over the Gulf of Mexico were relatively cloud-free, giving the Sea-viewing Wide Field-of-view Sensor (SeaWiFS) a chance to capture this expansive view of colorful waters along the coastline. Around the circumference of the Gulf, the outflow of several rivers is visible in colorful swirls that are probably a mixture of sediment, dissolved organic matter, and chlorophyll from algae and phytoplankton in coastal waters.

The two most striking plumes are the patch of dark water around the mouth of the Suwannee River in northern Florida (top right) and the plume of greenish-tan water extending from the Mississippi Delta (top center). (For more details about river outflows and their contribution to coastal black water patches, please see Oh Black Water, Keep On Rollin’.) East of Houston, very dark waters amid lighter green swirls indicate something in the water —possibly chorophyll— is absorbing a lot of the light.

Another dark patch of coastal waters is visible at bottom center of the scene, in the Gulf of Tehuantepec on the Pacific Coast of southern Mexico. In this case, the color may have less to do with substances in the water, and more to do with the combination of meteorology, sunlight, and the sensor’s angle of view. Strong winds regularly blow across the narrow strip of land separating the Gulf of Mexico from the Gulf of Tehuantepec, creating large swells on the Pacific. During the satellite’s southward overpass of the region, the sensor was pointing 20 degrees aft (backwards toward the north). The reflection of light off the forward faces of the large waves may have hidden the true color of the surface waters. The dark water is streaked with streamers of light turquoise from rivers.

The full-size image shows a remarkable cloud-free view of roughly two-thirds of the United States, including large pinkish-tan swaths of fallow croplands south of the Great Lakes; the Appalachian Mountains and Plateau, wearing their winter brown; the Shenandoah Valley, still dressed in pale green; the green-and-tan speckled alluvial plain of the Mississippi River, surrounded in the South by deep green forests.

Image provided by the SeaWiFS Project, NASA/Goddard Space Flight Center, and ORBIMAGE. This SeaWiFS image is for research or educational use only. All commercial use of SeaWiFS data and imagery must be coordinated with ORBIMAGE.