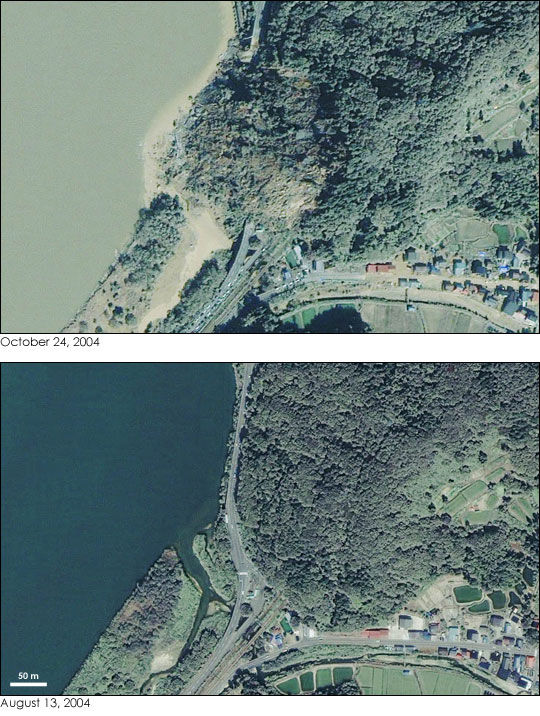 On October 23, 2004, a string of earthquakes with magnitudes ranging from 5.9 to 6.8 struck the Niigata prefecture in northern Japan, about 250 kilometers (150 miles) north of Tokyo. The quakes killed 31, and injured thousands more, making them the deadliest earthquakes Japan has experienced in nearly a decade. Some of the most serious damage was caused by landslides when rain-soaked hillsides slipped under the Earth’s tremors. Typhoon Tokage had swept over the region just days before, and its torrential rains are blamed for contributing to the landslides.

These images show one such landslide on the Enoki Tunnel with mud, rock, and trees covering the road along the river. The images were collected on October 24, top, and August 13, below, by Space Imaging’s IKONOS satellite. In the image taken on October 24, one day after the earthquakes, the river is a murky green, tainted by sediment, probably from both the earthquake-induced landslides and the run-off caused by the typhoon’s heavy rains. Imagery collected after a natural disaster such as this earthquake could be used to assess damage to natural and man-made features such as houses, roads, and surrounding infrastructure. Emergency response agencies can also use map-accurate imagery to plan evacuations, recovery operations and establish victim relief centers.

A series of powerful earthquakes rattled northern Japan starting on the evening of October 23.