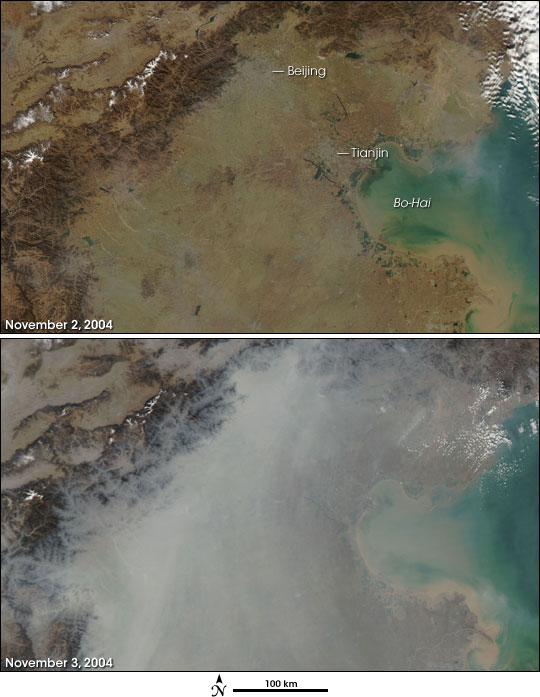 Between the afternoon of November 2 and November 3, 2004, a layer of haze built up in east-central China near the coast of Bo-Hai (the body of water at right). The eastern coastal plain in this part of China is frequently plagued with poor air quality, due to increasing vehicle pollution in large cities like Beijing, coal-fired power plants, and home heating and cooking fires. The location and topography do not help the situation. The mountains to the west trap the haze over the plain, and the meteorological influences in the area often create what’s called a “temperature inversion,” in which the air near the surface is cooler than the air higher in the atmosphere. (Normally, air temperatures decrease with altitude.) Since cooler air has less tendency to rise, the haze can remained trapped near the surface until the weather changes.

The top image is from November 2nd, and was acquired in true-color by the Moderate Resolution Imaging Spectroradiometer (MODIS) instrument aboard NASA’s Aqua satellite. The lower image, from November 2nd and also acquired by the Aqua MODIS instrument, shows the same scene without the pollution. The pollution gathered overnight, and lingered until November 5th. By November 6th, a new cloud of haze had accumulated.