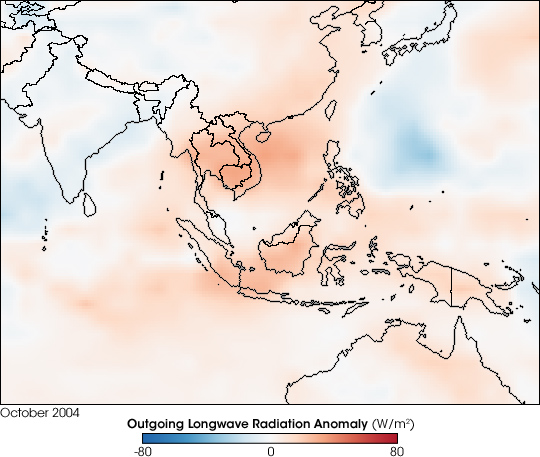 In a typical monsoon season in South East Asia, the rains fall until October, but this year, the heavens went dry three to four weeks early. For farmers, who rely on monsoon rains to nourish crops, the early onset of the dry season could mean a reduced harvest. According to the Production Estimates and Crop Assessment Division of the U.S. Department of Agriculture's Foreign Agricultural Service, the lack of rain affected the tail end of the growing season, and while most crops should be fine, yields could be reduced because of a lack of rain. The government of Thailand has already announced that the rice harvest will be less than expected, and the AFP reports that the Cambodian government is concerned about potential food shortages. In Cambodia, 80-85 percent of all rice is grown during the monsoon season.

The early end to the rainy season could spell trouble for the next growing season, which depends on irrigation instead of rainfall. Not only did the rains end early, but less rain fell during the monsoon, and that could mean a shortage of irrigation water stored in reservoirs, particularly if the dry season lasts longer than normal.

The above image confirms the absence of clouds associated with precipitation over Southeastern Asia during the month of October. The image is based on measurements of outgoing longwave radiation (OLR), the amount of heat being reflected from the Earth back into space, in Watts per square meter. Clouds tend to be cold, while land masses are warmer. Outgoing longwave radiation can help scientists monitor rainfall by showing where rainfall clouds are, or in this case, where they aren't. The above image is a comparison of the amount of outgoing longwave radiation observed in October 2004, to the October average observed from 1979 to 1995. Areas that radiated more heat than average are red and those that radiated less are blue. Southeast Asia was radiating more heat than normal in October--a sign that fewer cool clouds covered the region. Indonesia, northern Australia, and parts of China also appear to be warmer, and possibly drier, than normal. This image was derived from measurements made by the TIROS Operational Vertical Sounder (TOVS) onboard the NOAA-POES satellite series.