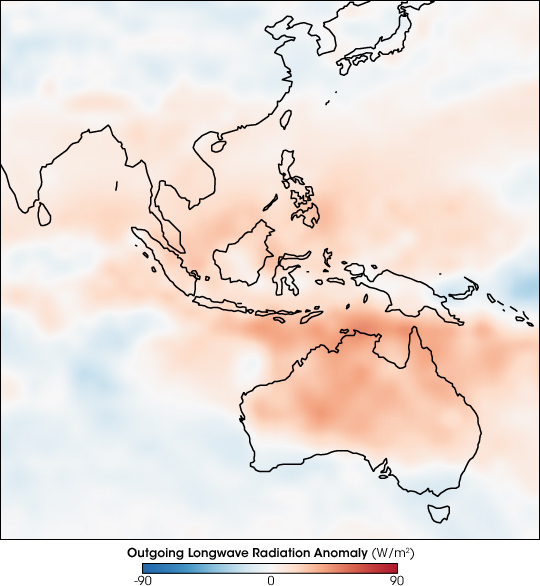 Little rain has fallen in Southeast Asia after an early end to the rainy season in October 2004, leaving the region in severe drought. From southern China, through the Indochina and Malay Peninsulas, and into some of the islands of Indonesia, crops are shriveling, and in some places, drinking water is scarce. According to news reports, the drought will cost farmers in Thailand up to US $193.2 million after 809,000 hectares of crops were lost. Vietnam has lost US $60 million in crops, and up to 1.3 million people do not have access to clean water. Other countries in the region have been similarly affected, with food shortages in Cambodia and a lack of drinkable water in Hainan, China. Rains eased the drought in parts of China in late February, but much of the region remains parched. It is the worst drought in 50 years.

The above image illustrates the extent of the drought in February 2005. The image shows outgoing longwave radiation, which is a measure of the amount of heat radiated from the surface of the Earth. Since clouds tend to be colder than the Earth’s surface, the measurement shows the distribution of clouds. It is one way to monitor drought because where there are no clouds, there is no rain. In this case, scientists have compared the amount of heat radiated from the surface this year to the average collected between 1979 and 1995. The result shows that significantly fewer cool clouds gathered over Southeast Asia in 2005 than normal, as reflected by the red that stretches from Australia to southern China. This image was derived from measurements made by the TIROS Operational Vertical Sounder (TOVS) onboard the NOAA-POES satellite series.