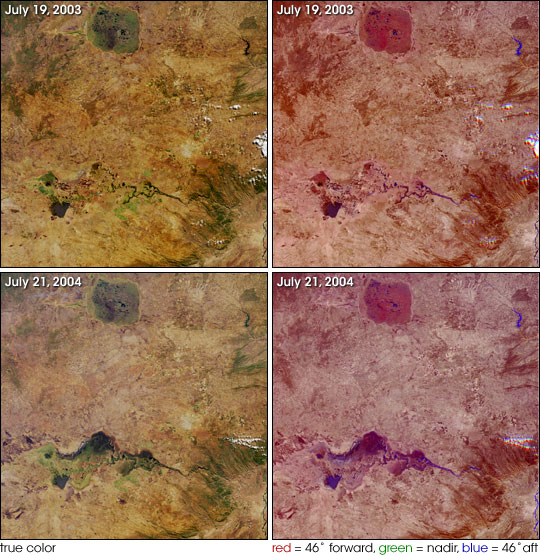 Not all floods are unwanted. Heavy rainfall in southern Africa between December 2003 and April 2004 provided central Zambia with floodwaters needed to support the diverse uses of water within the Kafue Flats area. The Kafue Flats are home to about one million people and provide a rich inland fishery, habitat for an array of unique wildlife, and the means for hydroelectricity production. The Flats falls between two dams: Upstream to the west (not visible here) is the Izhi-tezhi, and downstream (middle right of the images) is the Kafue Gorge dam. Since the construction of these dams, the flooded area has been reduced and the timing and intensity of the inundation has changed. During June 2004 an agreement was made with the hydroelectricity company to restore water releases from the dams according to a more natural flooding regime.

These images from NASA’s Multi-angle Imaging SpectroRadiometer (MISR) illustrate surface changes to the wetlands and other surfaces in central Zambia resulting from an unusually lengthy wet season. The Kafue Flats appear relatively dry on July 19, 2003 (upper images), with the Kafue River visible as a slender dark line that snakes from east to west on its way to join the Zambezi (visible in the lower right-hand corner). On July 21, 2004 (lower images), well into the dry season, much of the 6,500-square kilometer area of the Kafue Flats remains inundated. To the east of the Kafue Flats is Lusaka, the Zambian capital, visible as a pale area in the middle right of the picture, north of the river. In the upper portions of these images is the prominent roundish shape of the Lukanga Swamp, another important wetland.

The images along the left are natural-color views from MISR’s nadir camera, and the images along the right are angular composites in which red band data from MISR’s 46° forward, nadir, and 46° backward viewing cameras is displayed as red, green and blue, respectively. In order to preserve brightness variations among the various cameras, the data from each camera were processed identically. Here, color changes indicate surface texture, and are influenced by terrain, vegetation structure, soil type, and soil moisture content. Wet surfaces or areas with standing water appear blue in this display because sun glitter makes smooth, wet surfaces look brighter at the backward camera’s view angle. Mostly the landscape appears somewhat purple, indicating that most of the surfaces scatter sunlight in both backward and forward directions. Areas that appear with a slight greenish hue can indicate sparce vegetation, since the nadir camera is more likely to sight the gaps between the trees or shrubs, and since vegetation is darker (in the red band) than the underlying soil surface. Areas which preferentially exhibit a red or pink hue correspond with wetland vegetation. The plateau of the Kafue National Park, to the west of Lukanga Swamp, appears brighter in 2004 compared with 2003, which indicates weaker absorption at the red band. Overall, the 2004 image exhibits a subtle blue hue (preference for forward-scattering) compared with 2003, which indicates overall surface changes that may be a result of enhanced surface wetness.

The Multiangle Imaging SpectroRadiometer observes the daylit Earth continuously and every 9 days views the entire globe between 82° north and 82° south latitude. The MISR Browse Image Viewer provides access to low-resolution true-color versions of these images. These data products were generated from a portion of the imagery acquired during Terra orbits 19072 and 24421. The panels cover an area of 235 kilometers x 235 kilometers, and utilize data from blocks 100 to 103 within World Reference System-2 path 172.