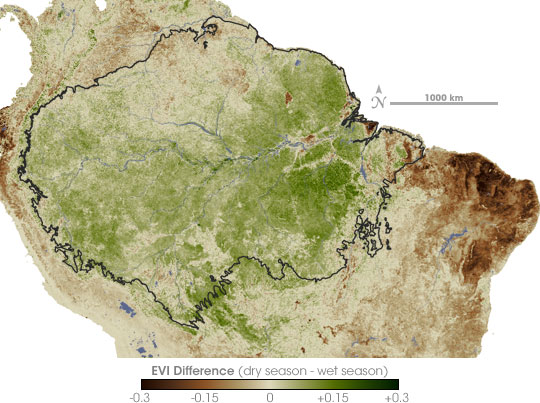 The Amazon Basin (black outline) stretches across the heart of South America. Much of the area is covered by rainforests. Layer upon layer of amazingly diverse plants and trees reaches from the forest floor to the tree tops. With all this lush plant life, it can be hard to believe that parts of the Amazon go months each year with little or no rain. Even more surprising is the fact that the dry season may actually be the “good season” for tree and plant growth.

A team of scientists led by ecologist Alfredo Huete at the University of Arizona made this discovery by combining five years of vegetation greenness data collected by the Moderate Resolution Imaging Spectroradiometer (MODIS) on NASA’s Terra satellite and then subtracting wet-season measurements from dry-season measurements. This image shows those results. Greenness is shown using a scale called the Enhanced Vegetation Index. Green indicates where vegetation flourished during the dry season, and brown shows where vegetation declined during the dry season.

To learn more about the discovery of the Amazon’s dry-season green-up, read the Earth Observatory feature story Defying Dry: Amazon Greener in Dry Season than Wet.

Map by Robert Simmon, based on data from the University of Arizona Terrestrial Biophysics and Remote Sensing Lab.