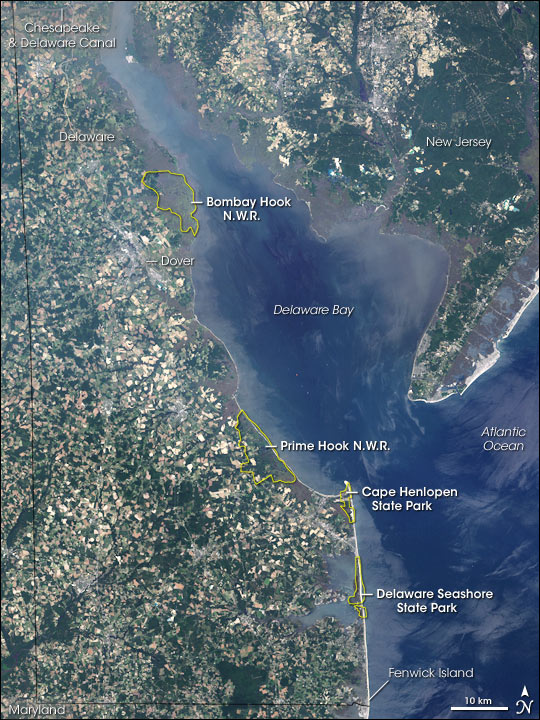 The first state of the Union is nearly the last in size. One of the original 13 colonies, Delaware was the first state to ratify the U.S. Constitution, but it is second to last in area, after Rhode Island. This small coastal state has a history closely entwined with the sea, and geologists reckon that Delaware was alternately submerged and exposed as the sea rose and fell. Today, the state’s highest point is only 100 meters (328 feet) above sea level.

The Landsat-7 satellite took this picture on July 10, 2001, capturing the portion of Delaware bordering the Delaware Bay and the Atlantic Ocean (the northern tip of the state is not shown). In this image, the waters of Delaware Bay and the Atlantic appear in varying shades of blue. The less populated, more vegetated land areas appear in lush green. Much of Delaware and New Jersey, however, are metropolitan, indicated by sharp-edged patches of white, gray, rust, and brown. Also shown in this image are Bombay Hook National Wildlife Refuge, Prime Hook National Wildlife Refuge, Cape Henlopen State Park, and Delaware Seashore State Park. These areas are all part of the Coastal Heritage Greenway, a 90-mile (145-kilometer) stretch of highway along Delaware’s coast that takes sightseers through historic sites and wildlife refuges.

Delaware Bay is said to be the home of the world’s biggest population of horseshoe crabs, and these crabs provide meals for migrating shorebirds. Prime Hook and Bombay Hook provide a refuge for many of these birds. Bombay Hook was shaped largely by a coastal storm in 1878, when unusually high tides broke through the protective dunes and turned what had been an island into a lake. Before the storm, the island had been a popular resort.