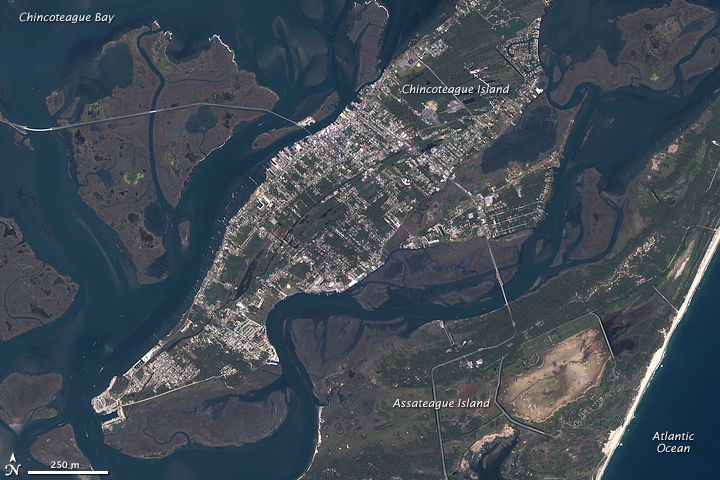 Along the Atlantic Coast of the United States stands a series of barrier islands, formed and reformed by hurricanes and severe storms that come in from the sea. Typically, barrier islands consist of very long and narrow sandbars that rise just a small amount above sea level, run roughly parallel to the coastline, and are separated from the mainland by inlets and bays. Assateague Island is one such barrier island, straddling the Atlantic coastline between Maryland and Virginia on the Delmarva Peninsula. Assateague Island encapsulates a long and shallow bay called Chincoteague Bay, and a series of smaller islands sits between Assateague and the mainland. The largest of these islands is Chincoteague Island. While Assateague is protected as a National Seashore (on the Maryland side) and National Wildlife Refuge (on the Virginia portion of the island), Chincoteague Island is developed, including a town with the island’s name.

This photo-like image of Chincoteague Island and the southern section of Assateague was acquired by the IKONOS satellite on June 27, 2001. Details as small as one meter (about three feet) can be discerned in the large image, resolving features as small as individual cars on the causeway (Virginia State Route 175) leading onto Chincoteague Island. The imagery is dominated by the contrast between developed Chincoteague Island and undeveloped Assateague, to the east. Chincoteague displays variously colored roofs, dark asphalt roads, bright white concrete, and a network of roads. Assateague Island has a mix of light and dark green vegetation, several patches of purplish-brown marshland, and a small number of roads around Snow Goose Pond (which appears completely dried out in this image). The brightest feature on Assateague Island is the strip of sandy beach facing the Atlantic.

An unusual feature of Assateague Island not visible in this image is the presence of wild horses, often referred to as “ponies” by park visitors. They are believed to be descendants of horses turned loose on the island as early as the seventeenth century by Eastern Shore residents. There are two herds, separated by a fence along the Maryland-Virginia state border. The National Park Service manages the Maryland herd while the Virginia herd is owned by the Chincoteague Volunteer Fire Company who have permits to allow them to graze in the National Wildlife Refuge. Once a year, horses from the Virginia herd are rounded up and sold at auctions to support the fire company. More typical inhabitants of the island include migratory birds, white-tailed deer, Sika deer (an Asian elk species released on the northern end of the island in 1923), pelicans, plovers, and, in the sheltered bays, crabs, quahogs, and a variety of fish.