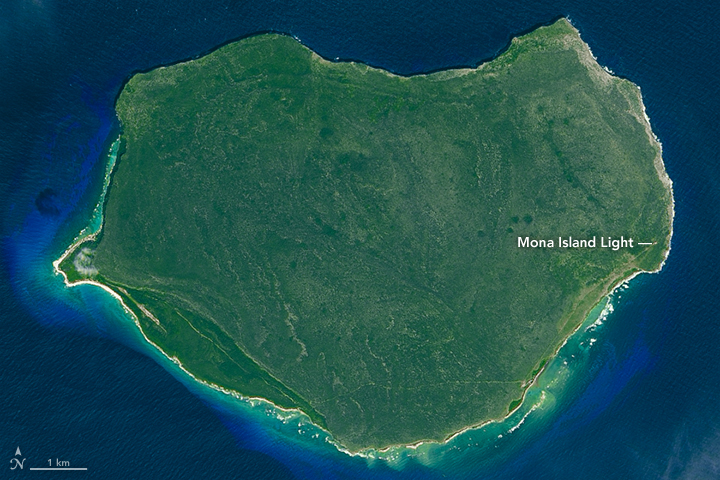 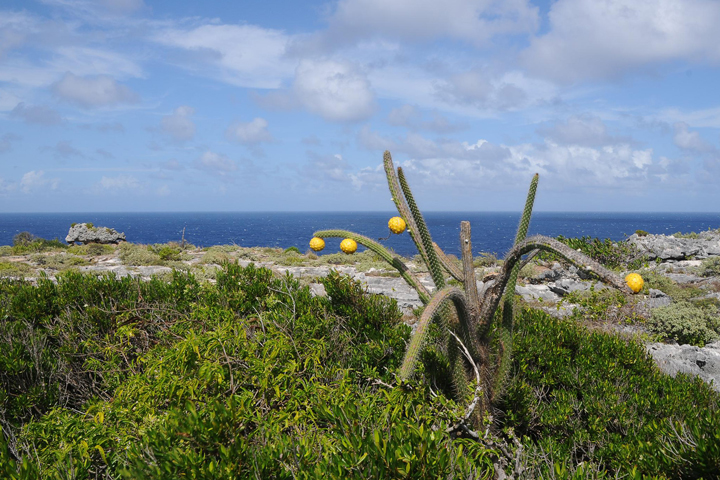 Puerto Rico’s main island spans more than 9,000 square kilometers and is lined with large cities and infrastructure to support a population of 3.5 million people. But just 75 kilometers (45 miles) to the west, a lesser-known and mostly uninhabited island of the Puerto Rican archipelago rises from the Caribbean.

Mona Island is a fraction of the size of the main island, covering just 56 square kilometers (22 square miles). Very few people actually live here; some rangers inhabit the island in order to manage visitors and research projects. But the island’s primary inhabitants are the plants and animals, the diversity of which has led Mona to be nicknamed the “Galapagos of the Caribbean.”

The Operational Land Imager (OLI) on Landsat 8 acquired an image (top) of the island on December 24, 2015. According to Sebastián Martinuzzi, an ecologist and remote sensing expert at the University of Wisconsin-Madison, the entire island is a limestone plateau with near-vertical cliffs on all sides. A narrow coastal plain is visible along the southwestern portion of the island. The dominant vegetation is subtropical dry forest, which thins as you move toward the east. An historic lighthouse, deactivated in 1976, is visible on the island’s eastern side.

The island is a natural reserve managed by the government of Puerto Rico. In 1975, the U.S. Secretary of the Interior designated Mona as a National Natural Landmark. Such distinctions are given to landscapes that preserve a significant biological or geological feature. Mona Island has both.

The National Park Service describes Mona Island and its tiny island neighbor to the northwest (outside of this image): “The sea caves on these islands are some of the largest, most extensive and most unusual in the world. The islands harbor a significant endemic biota and provide important seabird rookery areas.”

Jan Zegarra of the U.S. Fish and Wildlife Service shot the photograph above, which shows some of the island’s unusual biota. Puerto Rico is the only place in the United States and its territories where the threatened Higo Chumbo Cactus (pictured) grows.