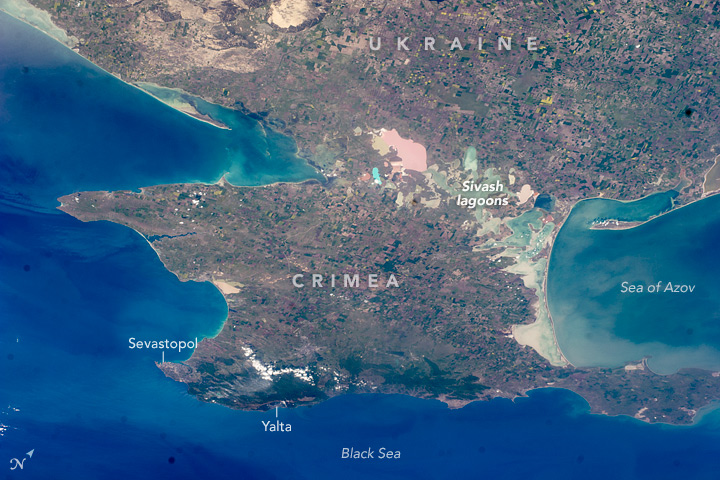 An astronaut aboard the International Space Station used a short lens to acquire this wide view of the diamond-shaped Crimean Peninsula that juts into the Black Sea. A mild climate has made Crimea a popular destination for Ukrainians and Russians from colder climes to the north.

A series of shallow lagoons and wetlands known as the Sivash separates the peninsula from the mainland. At no more than 3 meters (10 feet) deep, these lagoons warm up in summer and become quite salty due to evaporation. The waters farthest inland from the Sea of Azov tend to develop different colors as a result of the salt-tolerant algae that live in them. These western Sivash lagoons make a unique landscape that immediately indicates to astronauts that they are above Crimea.

Crimea is a small part of the world (325 kilometers in an east-west direction) but one that has acquired fame over the centuries. Sevastopol saw heavy fighting between the Russians and Germans in World War II, and Yalta is the city where Allied leaders met for their famous conference to discuss post-war arrangements. Balaklava, near Sevastopol, became famous during the Crimean War of the 1850s for the Charge of the Light Brigade—and for the head and neck garment first worn there by soldiers. Sevastopol is also the home port of Russia’s Black Sea Fleet.

An image taken two seconds later shows the Strait of Kerch (just outside this image on the far left), the shipping route that connects the Sea of Azov with the Black Sea.

Astronaut photograph ISS039-E-20171 was acquired on May 7, 2014, with a Nikon D3S digital camera using an 80 millimeter lens, and is provided by the ISS Crew Earth Observations Facility and the Earth Science and Remote Sensing Unit, Johnson Space Center. The image was taken by a member of the Expedition 39 crew. The image has been cropped and enhanced to improve contrast, and lens artifacts have been removed. The International Space Station Program supports the laboratory as part of the ISS National Lab to help astronauts take pictures of Earth that will be of the greatest value to scientists and the public, and to make those images freely available on the Internet. Additional images taken by astronauts and cosmonauts can be viewed at the NASA/JSC Gateway to Astronaut Photography of Earth. Caption by M. Justin Wilkinson, Texas State U., Jacobs Contract at NASA-JSC.