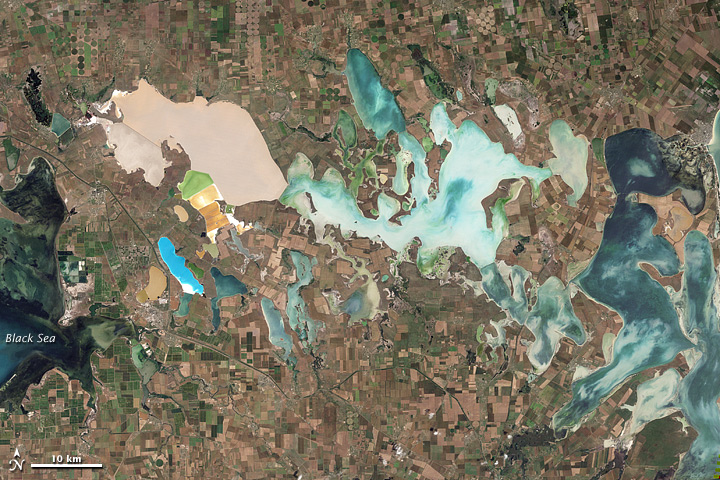 From mainland Ukraine, the Crimean Peninsula extends southward, bordered on the west by the Black Sea and on the east by the Sea of Azov. Stretching across the peninsula is a network of shallow, marshy inlets sprawling over roughly 1,000 square miles (2,600 square kilometers). This network of lagoons is known as Sivash (also Syvash or Sivaš). During the summer months, the warmed marsh waters give off unpleasant odors, lending the region the nicknames of “Rotten Sea” or “Putrid Sea.”

The Thematic Mapper on NASA’s Landsat 5 satellite captured this natural-color image on June 6, 2010. The shallow waters and varied chemical composition of the Sivash lagoons contribute to their unearthly colors of peach, mustard, lime green, blue, blue-green, beige, and brown. Thick layers of silt coat the bottoms of the shallow marshes, which are rich enough in mineral salts to supply a local chemical plant.

Surrounding the marshy areas are agricultural fields, most of them rectangular, but some are shaped by center-pivot irrigation systems. Urbanized areas appear along the shores of the Black Sea, and highways curve and zigzag across the peninsula.

Outside of the marshes, the land in this area is generally a level plain of arid steppe. In colder months, frosts alternate with thaws, and fogs are frequent.