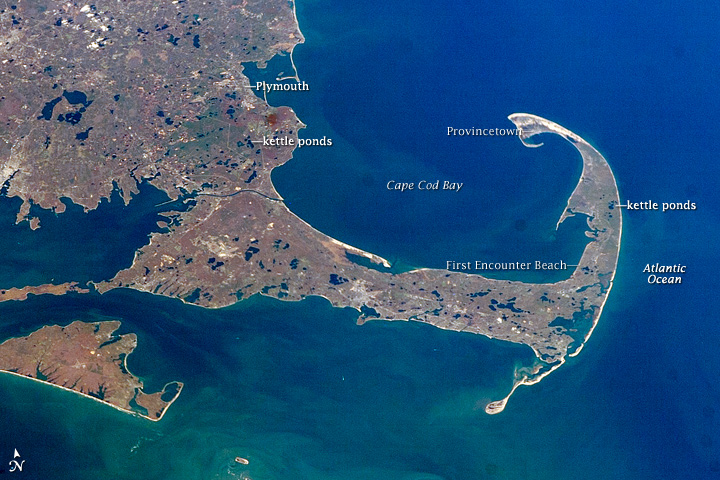 Cape Cod is a haven for waves of migrants who have washed up on American shores. The most famous arrived in the early 1600s, and hundreds of thousands now visit every summer. But most of the migrants washed up between 18,000 and 23,000 years ago.

In September 1620, English Separatists, also called the Pilgrims, left Europe to set up a colony near the mouth of the Hudson River. On November 20, they sighted land and confirmed it to be Cape Cod. This arm-shaped peninsula of Massachusetts is shown here in 2007 in a digital photograph from astronauts aboard the International Space Station.

The Pilgrims initially decided to sail farther south, but quickly became wary of the shallow waters and shoals east and south of Cape Cod and Nantucket—waters full of the sandy, rocky outwash from ancient glaciers. They sailed around the northeastern tip of the Cape and on November 21, 1620, dropped anchor just off the shores of modern-day Provincetown. While resting in that harbor, they composed and signed the Mayflower Compact, an agreement to establish self-government.

In the weeks that followed, the Pilgrims explored the Cape and made their first encounter with the Wampanoag Indians, native people whose ancestors may have explored and inhabited Cape Cod as early as 11,000 years ago. Eventually, the Pilgrims made their way to the western shores of Cape Cod Bay, landing near an abandoned Wampanoag settlement known as Patuxet.

Plymouth Rock—which is likely a creation of oral history and legend, since there is no mention of it in the writings of the original Mayflower voyagers—is a glacial erratic, a large boulder that dropped out of a glacier.

The Cape’s sandy peninsula and a fair bit of southeastern Massachusetts is, in a way, also a migrant. The area was both built up and scoured by the Laurentide Ice Sheet, which stretched down past Martha’s Vineyard and Nantucket during Earth’s last major Ice Age. In their advance and retreat, the glaciers composing the ice sheet scraped rock off of Earth’s surface, eventually depositing it on Cape Cod. The U.S. Geological Survey estimates that the deposits are 200 to 600 feet thick across the region.

Though this photo cannot show all the rocks left behind, it does show the dozens of kettle hole ponds. As the ice sheet retreated, sediments washing out of the glaciers occasionally covered chunks of ice. Those ice blocks would eventually melt and collapse the sediments, creating the space for the fresh groundwater-fed ponds we see today.

Editor’s Note: On the original Mayflower Compact, the date is listed as November 11. When Western societies switched from the Julian calendar to the Gregorian calendar, 10 days were added, turning November 11 into November 21.

Astronaut photograph ISS016-E-10312 was acquired on November 7, 2007, with a Kodak DCS760C digital camera using an effective 70 mm lens, and is provided by the ISS Crew Earth Observations experiment and Image Science & Analysis Laboratory, Johnson Space Center. The image was taken by the Expedition 16 crew. The image in this article has been cropped and enhanced to improve contrast. Lens artifacts have been removed. The International Space Station Program supports the laboratory as part of the ISS National Lab to help astronauts take pictures of Earth that will be of the greatest value to scientists and the public, and to make those images freely available on the Internet. Additional images taken by astronauts and cosmonauts can be viewed at the NASA/JSC Gateway to Astronaut Photography of Earth. Caption by Mike Carlowicz.