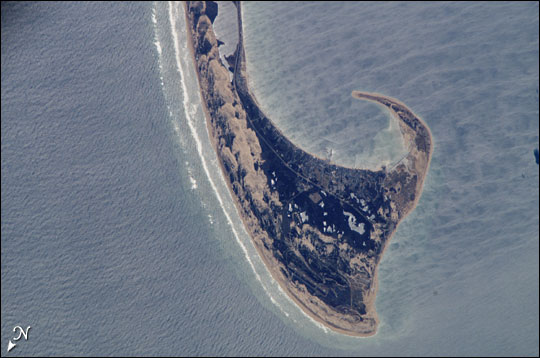 Compared to Old World settlements like Rome and Alexandria, Cape Cod is fairly young. The area got its name from a little-known explorer, Bartholomew Gosnold, in 1602. Compared to other parts of the world, Cape Cod’s geology is fairly young as well; the major forces shaping the landscape all happened within the last 25,000 years.

This astronaut photograph, taken from the International Space Station, shows the northernmost parts of the Cape Cod National Seashore, also known as Provincetown Spit. The orientation of this photograph differs from most maps, with the direction of north to the lower left. This image is one of astronaut Leroy Chiao’s Top Ten favorite photographs.

Most of Cape Cod’s geological history involves the advance and retreat of the last continental ice sheet in the late Pleistocene geological era and the subsequent change in sea level. (The Pleistocene spanned roughly 1.8 million to 10,000 years ago.) Using radiocarbon dating techniques, researchers have determined that around 23,000 years ago, the ice sheet reached its maximum southward advance over North America, and then started to retreat. By about 18,000 years ago, the ice sheet had retreated past Cape Cod. By roughly 15,000 years ago, it had retreated past southern New England.

When so much of Earth’s water was locked up in massive ice sheets, the sea level was lower. As the ice began to melt, the sea began to rise. Initially, sea level rose quickly, about 15 meters (50 feet) per 1,000 years, but then the rate declined. On Cape Cod, sea level rose roughly 3 meters (11 feet) per millennium between 6,000 and 2,000 years ago. After that, it continued to rise at about 1 meter (3 feet) per millennium. By 6,000 years ago, the sea level was high enough to start eroding the glacial deposits that the vanished continental ice sheet had left on Cape Cod. The water then carried the eroded deposits along the shoreline. Those reworked sediments found a new home on the tip of Cape Cod. Provincetown Spit, shown in this photograph, consists largely of marine deposits, transported from farther up the shore. So while other parts of the Cape have dwindled away from the action of the waves, this part of the Cape has grown.

Astronaut photograph ISS010-E-21965 was acquired March 30, 2005, with a Kodak 760C digital camera with an 800 mm lens, and is provided by the ISS Crew Earth Observations experiment and the Image Science & Analysis Group, Johnson Space Center. The International Space Station Program supports the laboratory to help astronauts take pictures of Earth that will be of the greatest value to scientists and the public, and to make those images freely available on the Internet. Additional images taken by astronauts and cosmonauts can be viewed at the NASA/JSC Gateway to Astronaut Photography of Earth.