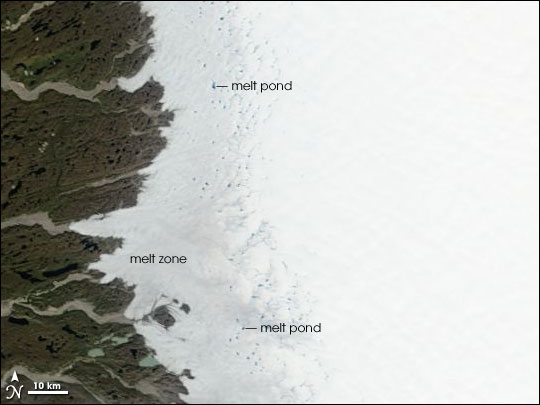 In 2002, melt of snow and ice on the Greenland ice sheet broke all known records. In 2005, satellite data indicated a new record in total melt extent on the Greenland ice sheet. June falls about midway through Grenland’s melt season, and June melting of the ice sheet can vary considerably from year to year. Although 2005 overall saw a new record, the extent of June melting in 2005 was unexceptional. The same held true for 2006, when this picture was taken.

The Moderate Resolution Imaging Spectroradiometer (MODIS) flying onboard NASA’s Terra satellite took this picture of the west coast of Greenland on June 26, 2006. This image shows the melt zone along the edge of the Greenland ice sheet. Unlike the brilliant, uniform white of the ice farther inland, the melt zone is gray where it is becoming saturated with water. Gray-blue melt ponds dot the fringes of the melt zone. These delicate-looking ponds can be destructive to the ice sheet. As the melt water in the ponds works its way down to the base of the ice, it eases the friction between the ice and the underlying rock. This lubrication causes the ice to move more quickly toward the sea.

Glaciologists estimate that the melting of the Greenland ice sheet typically reaches its peak around July 20 each year. This ice sheet is dynamic, however, and different conditions can lead to different behavior. For this reason, scientists continue to monitor melt patterns in the ice sheet, including timing and extent, to see whether they are changing over time.