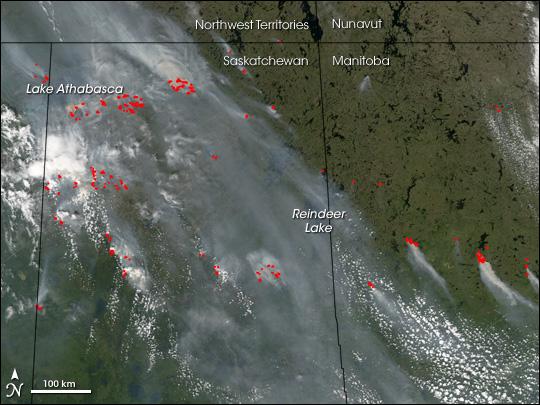 In central Canada, wildfires were spreading thick smoke and forcing evacuations on June 28, 2006. Forest fires, many triggered by lightning, were burning in Alberta, Saskatchewan, and Manitoba when the Moderate Resolution Imaging Spectroradiometer (MODIS) on NASA’s Aqua satellite passed overhead and captured this image on June 27. Places where MODIS detected actively burning fire are marked in red.

Grayish smoke almost completely hides Lake Athabasca (upper left), which sits at the border of Alberta (far left) and Saskatchewan provinces. A veil of smoke also covers Reindeer Lake, at the Saskatchewan-Manitoba border. According to reports from Reuters news service, the smoke is the primary cause of evacuation orders for communities in Saskatchewan province. On June 26, MODIS observed smoke from the fires blowing southward several hundred kilometers, beyond Lake Winnipeg.

Numerous large and smoky fires were burning in central Canada in late June and early July 2006.

In Manitoba, Canada, north of Lake Winnipeg, several massive fires were burning on July 23, 2007. Thick plumes of smoke spread east from the forest fires. In previous days, smoke from fires degraded the air quality enough that people in communities near Southern Indian Lake (hidden by smoke to the west of Gauer Lake) had to evacuate.