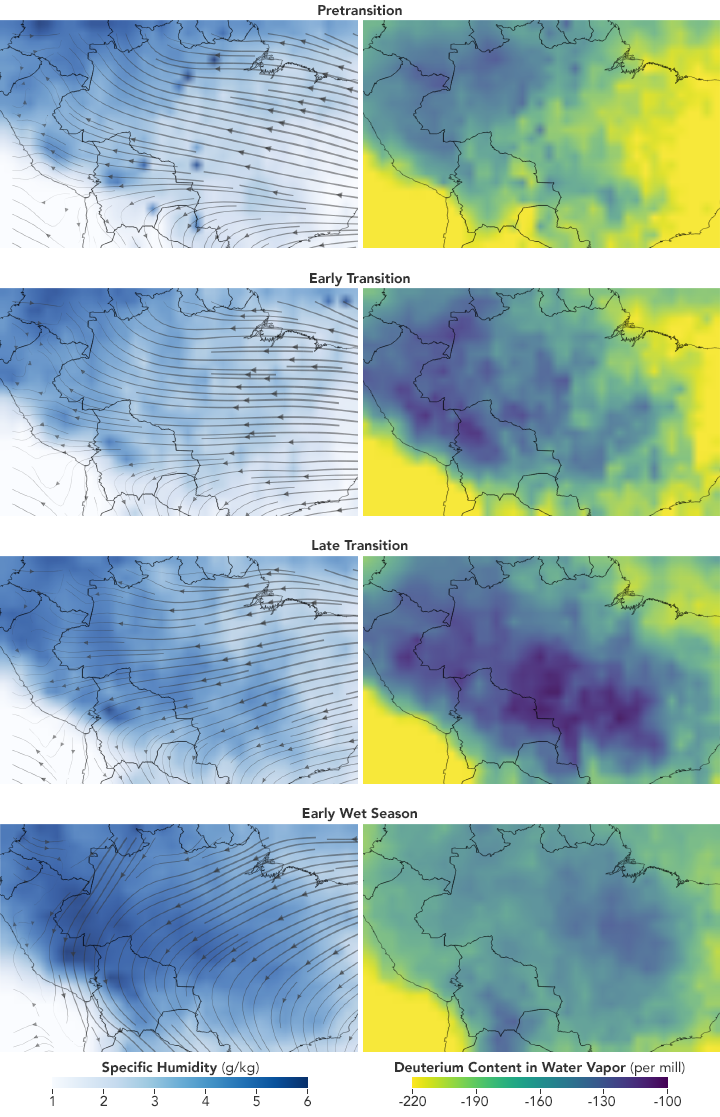 Scientists have known for some time that transpiration—the process by which plants and trees release moisture to the atmosphere—contributes much of the water that falls back down on the Amazon rainforest in its “wet season.” But that moisture led to a chicken-or-egg question: does transpiration amplify the rainy season or does it start it?

New evidence from models and sensors, including a NASA satellite, suggests that the trees essentially make their own rainy season, at least in the southern portion of the rainforest. In the new study, scientists analyzed water vapor data to show that at the end of the dry season, the clouds that build over the southern Amazon are formed from water rising from the forest itself. This moisture from the trees primes a natural atmospheric pump, creating enough instability and providing enough water to develop the persistent rain patterns of the region.

The results have implications for land use in the area because deforestation can alter this natural rainfall pump. Recent observations have shown that the wet season in the southern Amazon has been starting as much as a month later than it did in the 1970s; the dry season is, consequently, lasting longer. The clearing and burning of rainforest can both reduce the amount of moisture in the air and produce smoky aerosols that can alter rainfall patterns. If the drying pattern continues, parts of the rainforest could eventually transition to savannah.

The images above show a key part of the rain-making process in the southern Amazon. The maps on the left show the specific humidity—how much water vapor is contained in the air masses—before, during, and after the transition from the dry season to the wet season. The lines and arrows (vectors) show the predominant wind direction. The maps on the right show the amount of deuterium (a heavier isotope of hydrogen) present in that water vapor, as measured by the Tropospheric Emission Spectrometer (TES) on NASA’s Aura satellite. Water vapor with more deuterium points to plants as the water source.

In most tropical regions, one of two factors usually controls the timing of the rainy season: monsoon winds—a seasonal change in wind direction from land to sea or sea to land—and the Intertropical Convergence Zone (ITCZ)—a belt of converging trade winds around the equator that shifts north or south with the seasons. The southern Amazon experiences both of these. But the monsoon usually does not start until November, and the ITCZ arrives in late December or January. Meanwhile the rainy season starts in mid-October.

Rong Fu of the University of California, Los Angeles, published research in 2004 suggesting that increased evaporation of water from rainforest trees might be the trigger that starts the wet season. “We didn't have hard evidence,” she said. “We speculated that the moisture came from vegetation because satellite measurements showed the vegetation became greener at the end of the dry season,” suggesting increased plant growth and transpiration.

For the new study, John Worden of NASA’s Jet Propulsion Laboratory developed a data analysis technique that enabled Fu, lead author Jonathon Wright (Tsinghua University), and colleagues to pinpoint the moisture source from TES data. The technique distinguishes between hydrogen and deuterium, which combines with oxygen to make heavy water. Lighter isotopes evaporate more easily than heavier isotopes, so water vapor that evaporates into the atmosphere has less deuterium than liquid water.

This difference was the key to solving the rainy-season mystery. The TES measurements showed that during the transition from dry to wet season, deuterium-rich transpired water becomes a significant moisture source for the atmosphere above the forest. Less deuterium would suggest the moisture was coming from monsoon winds or the ITCZ.