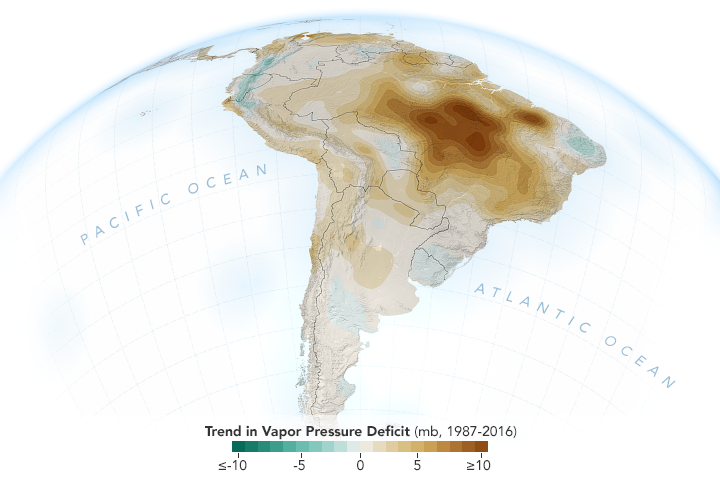 Over the past twenty years, the atmosphere above the Amazon rainforest has been drying out, increasing the demand for water and leaving ecosystems vulnerable to fires and drought. That is the conclusion of a new NASA study, which also shows that this increased dryness is primarily the result of human activities.

Scientists at NASA’s Jet Propulsion Laboratory (JPL) analyzed decades of ground and satellite data to track both how much moisture was in the atmosphere over the Amazon rainforest and how much moisture was needed to maintain the ecosystem. The map above shows the decline of moisture in the air over South America from 1987 to 2016, particularly across the south and southeastern Amazon, during the dry season months (August through October). Using data from NASA’s Atmospheric Infrared Sounder (AIRS) on the Aqua satellite and other instruments, the researchers calculated the vapor pressure deficit (VPD)—the difference between the amount of moisture in the air and how much moisture the air can hold when it is saturated. When VPD increases, the amount of moisture in the air relative to its capacity is reduced and the air is drier.

“We observed that in the last two decades, there has been a significant increase in dryness in the atmosphere as well as in the atmospheric demand for water above the rainforest,” said JPL’s Armineh Barkhordarian, lead author of the study. “In comparing this trend to data from models that estimate climate variability over thousands of years, we determined that the change in atmospheric aridity is well beyond what would be expected from natural climate variability.”

So if it is not natural, what is causing it? According to Barkhordarian, elevated global greenhouse gas levels are responsible for approximately half of the increased aridity. The rest is the result of ongoing human activity—most significantly, the burning of forests to clear land for agriculture and grazing. The combination of these activities is causing the Amazon’s climate to warm.

When a forest burns, it releases aerosol particles into the atmosphere, including black carbon or soot. While bright-colored or translucent aerosols reflect sunlight, darker aerosols absorb it. When airborne black carbon absorbs heat, it causes the atmosphere to warm. It can also interfere with cloud formation and, consequently, rainfall.

The Amazon is the largest rainforest on Earth. When healthy, it absorbs billions of tons of carbon dioxide (CO2) per year through photosynthesis, the process plants use to convert CO2, sunlight, and water into food. By removing CO2 from the atmosphere, the Amazon helps to regulate climate.

But it is a delicate system that is highly sensitive to drying and warming trends. Trees and plants need water for photosynthesis and to cool themselves when they get too warm. They pull in water from the soil through their roots and release water vapor (through pores on their leaves) into the atmosphere. That water vapor cools the air of the forest but also eventually rises to form clouds (such as those in the Aqua MODIS satellite image below). Those clouds produce rain that replenishes the water in the soil, allowing the cycle to continue. In fact, previous research has shown that rainforests generate as much as 80 percent of their own rain, especially during the dry season. 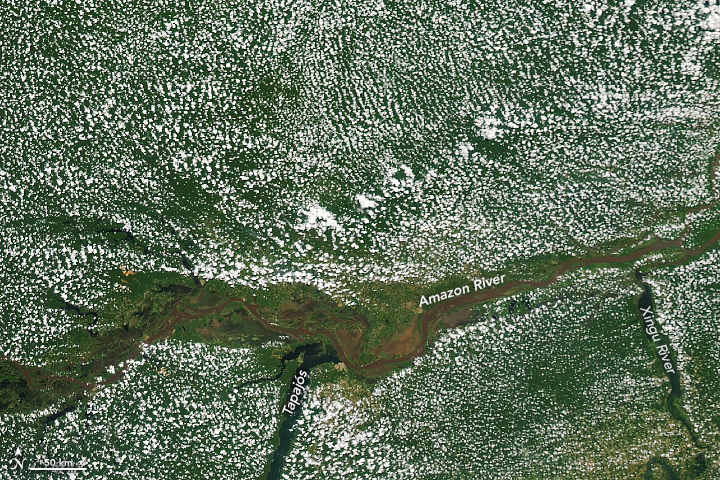 But when this cycle is disrupted by an increase in dry air, for instance, a new cycle is set into motion—one with significant implications, particularly in the southeastern Amazon, where trees can experience more than four to five months of dry weather.

“It’s a matter of supply and demand. With the increase in temperature and drying of the air above the trees, the trees need to transpire to cool themselves and to add more water vapor into the atmosphere,” said JPL's Sassan Saatchi, co-author of the study. “But the soil doesn’t have extra water for the trees to pull in. Our study shows that the demand is increasing, the supply is decreasing, and if this continues, the forest may no longer be able to sustain itself.”

Scientists observed that the most significant and systematic drying of the atmosphere has occurred in the southeast, where the bulk of current deforestation and agricultural expansion is happening. But they also found episodic drying in the northwest Amazon, an area that typically has no dry season. The northwest has suffered some severe droughts over the past two decades, a further indication of the entire forest’s vulnerability to increasing temperatures and dry air.

If this trend continues over the long term and the rainforest reaches the point where it can no longer function properly, many of the trees and the species that live within the rainforest ecosystem may not be able to survive. As the trees die, particularly the larger and older ones, they will release carbon dioxide into the atmosphere; and the fewer trees there are, the less CO2 the Amazon region would be able to absorb, removing an important element of climate regulation.