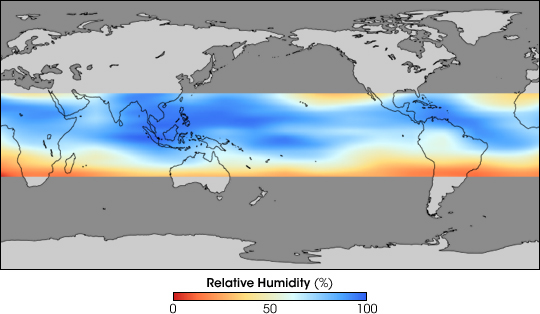 Using instruments aboard NASA’s Upper Atmosphere Research Satellite (UARS), scientists measured humidity high in the atmosphere. The researchers compared those humidity measurements with sea surface temperature records. Based upon these observations, scientists then measured the feedback between rising temperatures and increasing concentrations of water vapor in the atmosphere. This crucial variable in climate change estimates had previously been based on speculation and modelling, but not direct observations. The scientists found that most climate models have been overestimating the amount of water vapor entering the atmosphere as the Earth’s surface warms. (For more details, read the NASA press release.)

The false-color image above maps the relative humidity in the upper troposphere—from 10-14 km, or 6-9 miles above the surface—in the tropics around the world. The blue areas represent areas of high relative humidity (up to 100 percent) and the red areas show very low humidity (down to 0 percent); white is an intermediate value (about 50 percent). Relative humidity relates to the saturation point of the atmosphere. This measure is determined by dividing the measure of water vapor in the air by the maximum amount of water the air is capable of holding at a given temperature. As air temperatures rise, warm air can hold more water, and the saturation point of the air also increases.

For more information, read: Will Runaway Water Warm the World?