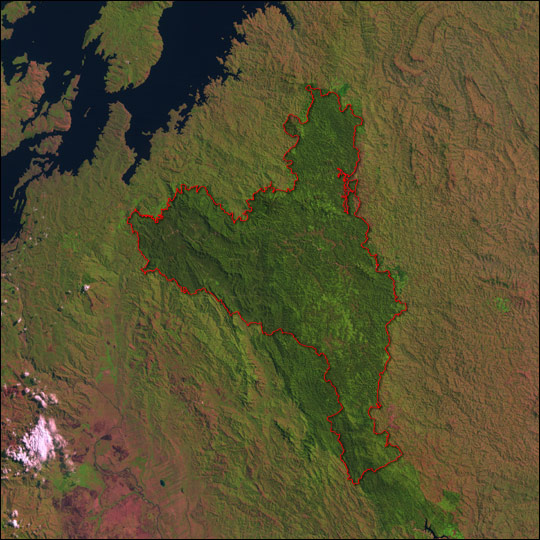 One of the richest mountain primate communities in Africa became a national park on March 3, 2004. Home to chimpanzees, Angolan black-and-white colobus monkeys, grey-cheeked mangabeys, and other primates, the Nyungwe National Park covers 970 square kilometers of rainforest, bamboo, grassland, swamps, and bogs in the mountains of Rwanda. In all, the new park boasts 13 different primate species, 260 bird species, and over 260 different types of trees and shrubs. Nyungwe became a forest reserve in 1933 when the surrounding land began to be cleared for farming. Now, over seventy years later, the government of Rwanda has made the reserve a national park. Nyungwe and the neighboring Kibira National Park in Burundi, to the south, together form the largest track of rainforest in eastern Africa.

Rwanda is one of Africa’s smallest and most densely populated countries. On average, the country has a population density of 314 people per square kilometer, with a total population of nearly 8 million. Most of these people depend on agriculture, which has increased the demand for farmland and other natural resources. This Landsat image, taken on July 19, 1986, shows that the land around the park has been cleared for farmland. The surrounding land is a light green in contrast with the park’s lush green forest canopy. The park’s boundaries are outlined in red. Lake Kivu is above the park.

The image above is a visualization created by merging imagery from the Landsat 5 satellite’s Thematic Mapper (TM) instrument with geographic information data provided by the Wildlife Conservation Society. This false-color image was created by combining the infrared, near-infrared, and red wavelengths (TM bands 5, 4, and 3).