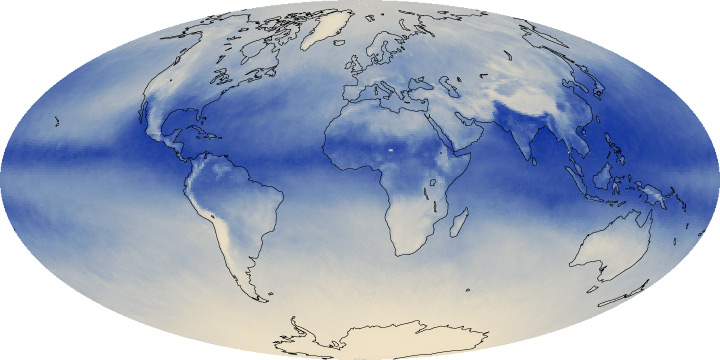 Of the 1.39 billion cubic kilometers (331 million cubic miles) of water on Earth, just a thousandth of 1% exists as water vapor. Yet this tiny amount of water has an outsized influence on the planet: It is a potent greenhouse gas and a major driver of weather and climate.

This map shows the distribution of water vapor in Earth’s atmosphere during August 2010. Even the wettest regions would form a layer of water only 60 millimeters (2.4 inches) deep if the entire column of air was condensed from the top of the atmosphere to the surface. The map was compiled from observations by the Atmospheric Infrared Sounder (AIRS) and the Advanced Microwave Sounding Unit (AMSU-A) on NASA’s Aqua satellite.

The map is one of several ways scientists can visualize the movement of water around the planet, as demonstrated in a new fact sheet examining the water cycle. Here is an excerpt:

“Studies have revealed that evaporation from oceans, seas, and other bodies of water provides nearly 90% of the moisture in our atmosphere. Most of the remaining 10% is released by plants through transpiration. Plants take in water through their roots, then release it through small pores on the underside of their leaves. In addition, a very small portion of water vapor enters the atmosphere through sublimation, the process by which water changes directly from a solid (ice or snow) to a gas.

Together, evaporation, transpiration, and sublimation, plus volcanic emissions, account for almost all the water vapor in the atmosphere. While evaporation from the oceans is the primary vehicle for driving the surface-to-atmosphere portion of the hydrologic cycle, transpiration is also significant. For example, a cornfield 1 acre in size can transpire as much as 4,000 gallons of water every day.

Water continually evaporates, condenses, and precipitates, and on a global basis, evaporation approximately equals precipitation. Because of this equality, the total amount of water vapor in the atmosphere remains approximately the same over time.”