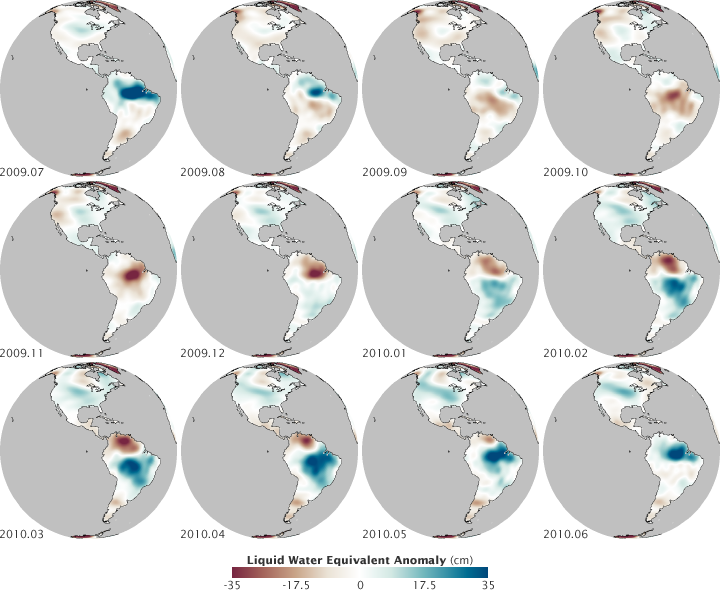 Water moves continuously between the atmosphere, ocean, and land. In much of the world, the differences in seasonal precipitation—and in how and where that water gets stored on land—are big enough to affect Earth’s local gravity field.

These maps show changes in water storage in the Western Hemisphere from July 2009 through June 2010; that is, they show how much more or less water is tied up in lakes and rivers, groundwater aquifers, soil moisture, snow, and glaciers. The measurements were made by the Gravity Recovery and Climate Experiment (GRACE), twin satellites that measure subtle changes in Earth's gravity over time. In this case, the satellites measured how Earth's gravity field changed as water piled up or was depleted from different regions at different times of year.

Though it is distributed over the landscape, water has mass; the greater the mass, the greater the gravitational attraction. Blues indicate increases above the normal water storage (mass) for an area, while browns indicate decreases. Water storage changes are measured in centimeters because they are, according to NASA hydrologist Matt Rodell, “expressed as an equivalent water level change, as if all the land's water were ponded on the surface.”

The differences in water storage are most obvious in South America. The Amazon basin receives significantly more water during the rainy season, so the equivalent height (or mass) of water is greater. The Amazon gets more rainfall than any other river basin in the world, and the seasonal water cycle is so strong that seasonal changes in North America, for instance, look small by comparison.

You can learn more about how scientists track the movement of water around the planet by reading our new fact sheet about Earth’s water cycle. Here is an excerpt:

“Among the most serious science and environmental policy issues confronting society are the potential changes in the Earth’s water cycle due to climate change. The science community now generally agrees that the Earth’s climate is undergoing changes in response to natural variability, including solar variability, and increasing concentrations of greenhouse gases and aerosols. Furthermore, agreement is widespread that these changes may profoundly affect atmospheric water vapor concentrations, clouds, precipitation patterns, and runoff and stream flow patterns…Orbiting satellites are now collecting data relevant to all aspects of the hydrologic cycle…”