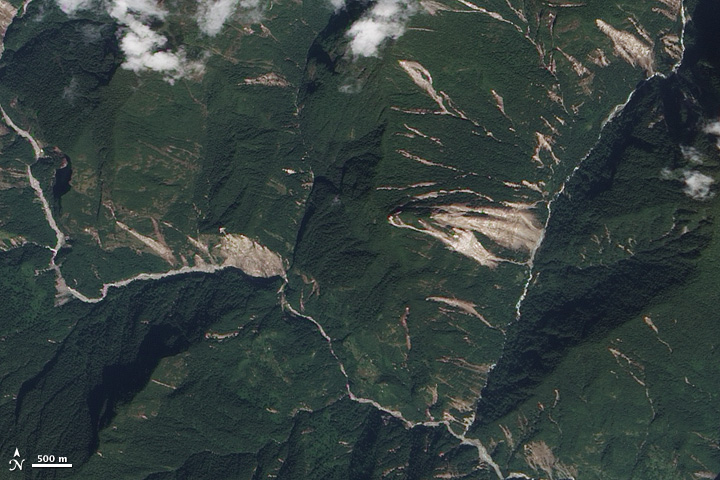 On September 18, 2011, a 6.9-magnitude earthquake struck the India-Nepal border region. According to news reports, impacts of the earthquake included landslides in in the northern Indian state of Sikkim, between Nepal and Bhutan.

The Advanced Land Imager (ALI) on NASA’s Earth Observing-1 (EO-1) satellite acquired this natural-color image of Sikkim on October 19, 2011. Landslides look like giant scratches on the landscape, where dirt and rock have displaced vegetation. The avalanches of earth terminate in river valleys. (Because of the angle of sunlight, this image may cause an optical illusion known as relief inversion.)

In early October 2011, geologist David Petley of the International Landslide Centre at Durham University noted that most of the landslides occurred on east- and south-facing slopes—away from the epicenter of the quake about 45 kilometers (28 miles) to the northwest.

As with most landslides occurring around earthquakes, researchers must ask whether those slides definitely resulted from the quakes. After comparing recent images of the Sikkim region to imagery from 2007, Petley stated that these slides most likely resulted from the September 18 earthquake, although other causes could not be ruled out, such as monsoon rains.