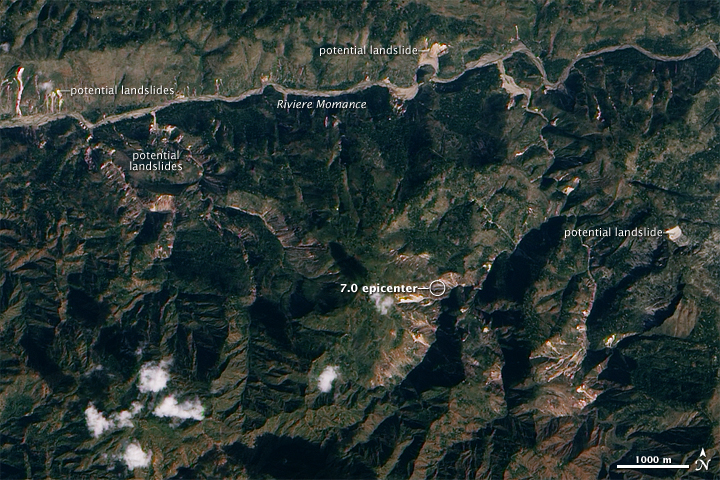 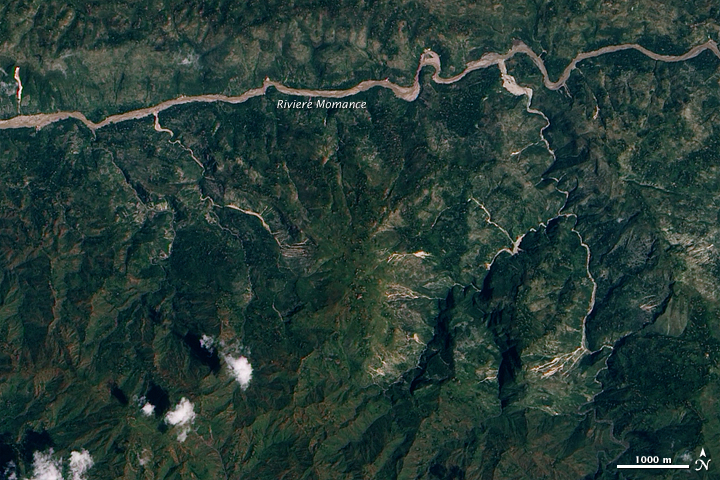 Haiti’s steep mountains combined with its tropical rainfall pose a threat for landslides. The 7.0-magnitude earthquake that devastated the country on January 12, 2010, may have also triggered landslides and shifted earth so that landslides are more likely in the future. This true-color image highlights potential new landslides around the earthquake’s epicenter, which is near the center of the scene. The landslides are bright streams of exposed earth that contrast with the dark green plants and tan soil around them. Some, but not all, of the potential landslides are labeled.

The image is from the Advanced Land Imager on NASA’s EO-1 satellite, and it was taken on January 15, 2010. The lower image, from the same sensor on the EO-1 satellite, was taken on September 14, 2008, about a week after Hurricane Ike dumped heavy rain on Haiti. Many of the landslides seen in the 2010 images are new since 2008, but some were evident in 2008.

The Water Center for Humid Tropics of Latin America and the Caribbean (SERVIR), a NASA-supported organization that provides satellite imagery and analysis to decision makers in Mesoamerica, including Haiti, compared the 2010 image shown here with other previously acquired imagery to identify regions where new slides may have occurred. The information has gone to national authorities and humanitarian response organizations. Full earthquake maps are available from SERVIR.