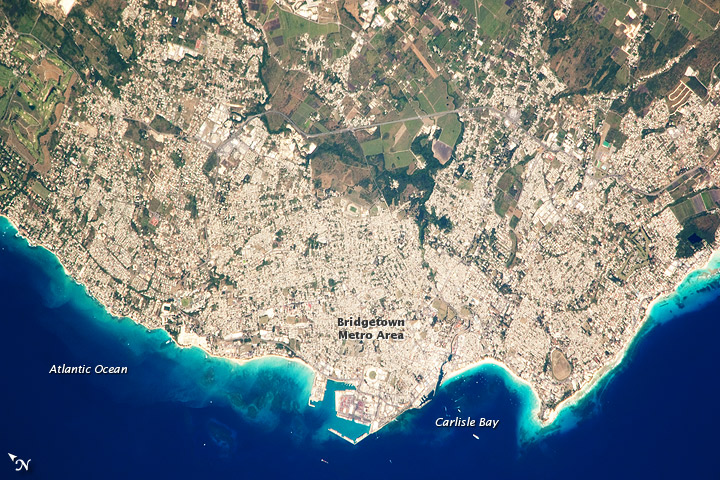 Bridgetown is the capital city of the island nation Barbados, located to the east of the Lesser Antilles Island chain. While Barbados is considered part of the Lesser Antilles, it is located within the western Atlantic Ocean rather than the Caribbean Sea. Barbados is a member of the British Commonwealth, and considers Queen Elizabeth II to be its constitutional monarch.

Besides being the seat of government, Bridgetown is the largest city in Barbados. It and the surrounding towns that make up the Greater Bridgetown area are located along the southwestern coastline of the island. The metropolitan area is readily recognizable in this astronaut photograph due to the gray and white rooftops and street grids (image center) that contrast with green vegetated fields and riverside areas of the island’s interior to the northeast (image top center).

Bridgetown is a major port destination for both commercial and cruise ships serving the eastern Caribbean—several ships are visible within Carlisle Bay. Water color in the image changes from light blue along the coastline—indicating shallow water—to the dark blue of deeper water away from the island.

Astronaut photograph ISS022-E-12031 was acquired on December 16, 2009, with a Nikon D2Xs digital camera fitted with an 800 mm lens, and is provided by the ISS Crew Earth Observations experiment and Image Science & Analysis Laboratory, Johnson Space Center. The image was taken by the Expedition 22 crew. The image in this article has been cropped and enhanced to improve contrast. Lens artifacts have been removed. The International Space Station Program supports the laboratory to help astronauts take pictures of Earth that will be of the greatest value to scientists and the public, and to make those images freely available on the Internet. Additional images taken by astronauts and cosmonauts can be viewed at the NASA/JSC Gateway to Astronaut Photography of Earth. Caption by William L. Stefanov, NASA-JSC.