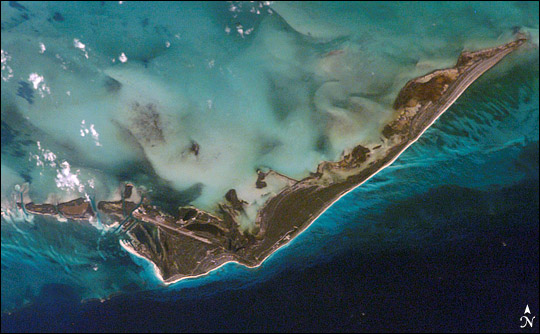 Cayo Largo del Sur, also known simply as Cayo Largo, is a little island no more than 25 kilometers (15.5 miles) long and 3 kilometers (1.9 miles) wide. It is the second-biggest island in Cuba’s Canarreos Archipelago. Christopher Columbus is said to have visited the island on his second expedition in 1494, and Sir Francis Drake may have also stopped on the island during his circumnavigation of the globe. Pirates also likely used the island as a base. Today, pristine beaches, scuba diving, and wildlife draw tourists to the island, but no people live there permanently; locals who work in the hotels stay for about 20 days, then return to their families on nearby islands.

Shallow water surrounds Cayo Largo, evidenced by the lighter shade of blue around the island’s perimeter. While the water south of the island appears clear enough to reveal the underlying ocean floor, the water on the north side of the island is cloudy. This cloudy water indicates that sediment is washing off the land surface and into the water or is being stirred up from the shallow sea floor.

Cayo Largo is a limestone island, formed over millions of years from the remains of marine organisms, such as the ones that build coral reefs. Living coral reefs form one more attraction for tourists on this island, although coral bleaching has stressed some reef communities in the Caribbean. The northern coast of Cayo Largo consists largely of mangroves and salt pans.

Astronaut photograph ISS012-E-8962 was acquired November 24, 2005, with a Kodak 760C digital camera using an 180 mm lens, and is provided by the ISS Crew Earth Observations experiment and the Image Science & Analysis Group, Johnson Space Center. The International Space Station Program supports the laboratory to help astronauts take pictures of Earth that will be of the greatest value to scientists and the public, and to make those images freely available on the Internet. Additional images taken by astronauts and cosmonauts can be viewed at the NASA/JSC Gateway to Astronaut Photography of Earth.