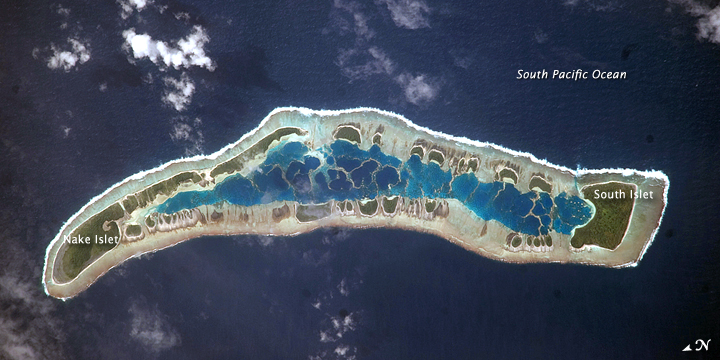 Millennium Island—known as Caroline Island prior to 2000—is located at the southern end of the Line Islands in the South Pacific Ocean. This uninhabited island is part of the Republic of Kiribati, an island nation comprised of 32 atolls (including Millennium Island) and one raised coral island. Millennium Island is formed from a number of smaller islets built on coral reefs. The coral reefs grew around a now-submerged volcanic peak, leaving a ring of coral around an inner lagoon. The islands above the waterline are composed primarily of limestone rock and sand derived from the reefs. At a maximum height of approximately 6 meters (19.7 feet) above sea level, Millennium Island has been identified as being at great risk from sea level rise by the United Nations.

The islets of Millennium Island are readily visible in this astronaut photograph as irregular green vegetated areas surrounding the inner lagoon. The shallow lagoon waters are a lighter blue than the deeper surrounding ocean water; tan linear “fingers” within the lagoon are the tops of corals. The two largest islets are Nake Islet and South Islet, located at the north and south ends of Millennium Island respectively. The ecosystem of Millennium Island is considered to be relatively pristine despite periods of human habitation, guano mining, and agricultural activities, and the island has been recommended as both a World Heritage site and Biosphere Reserve.

Astronaut photograph ISS020-E-16279 was acquired on July 1, 2009, with a Nikon D3 digital camera fitted with an 800 mm lens, and is provided by the ISS Crew Earth Observations experiment and Image Science & Analysis Laboratory, Johnson Space Center. The image was taken by the Expedition 20 crew. The image in this article has been cropped and enhanced to improve contrast. Lens artifacts have been removed. The International Space Station Program supports the laboratory to help astronauts take pictures of Earth that will be of the greatest value to scientists and the public, and to make those images freely available on the Internet. Additional images taken by astronauts and cosmonauts can be viewed at the NASA/JSC Gateway to Astronaut Photography of Earth. Caption by William L. Stefanov, NASA-JSC.